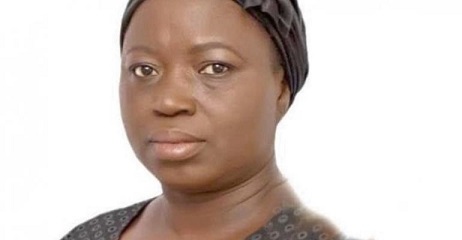 Madam Lydia Lamisi Akanvariba, Member of Parliament (MP)-elect for Tempane Constituency in Upper East Region, has assured her constituents she would work hard to justify the confidence reposed in her during the 2020 election.

She resolved to ensure the completion of all abandoned projects to boost economic development and create an enabling environment for job creation to improve livelihoods.

She beat Mr Joseph Dindiok Kpemka of the New Patriotic Party (NPP) and incumbent MP by 4,477 votes.
Madam Akanvariba is the widow of late David Adakurugu, first MP for Tempane Constituency since its separation from Garu in 2012.

The 47-year old Nurse became the NDC Parliamentary candidate for the Tempane Constituency after the death of her husband, Adakurugu, who had won the parliamentary primaries in 2018.

She then contested the Primaries a few months later with Mr Alfred Azaabi and won.

Madam Akanvariba therefore sets the record of becoming the first female to represent the constituency and joins Madam Laadi Ayii Ayamba, the incumbent MP and MP-elect on the ticket of the NDC for Pusiga Constituency.

In an interview with the Ghana News Agency, Madam Akanvariba, who also holds a Bachelor of Law degree, expressed gratitude to the people of Tempane for the opportunity to lead them.

She said the constituency would be well represented in Parliament to bring the needed development to the area.
She noted that the current MP did not do much to develop the area and said the constituents trusted her as a woman to bring relief to them.

She promised to work hard to justify the mandate given to her and said during the campaign leading to the election, she presented a well-crafted message of hope and was, therefore, committed to ensuring its fruition.

“Meanwhile their nearest neighbor, which is Pusiga has a woman as MP and she is doing very well, so they felt they needed a woman to bring development.”

Akanvariba pledged to lobby, advocate and facilitate the completion of abandoned projects started by the previous government.

She mentioned road infrastructure, potable water, and sustainable jobs for the youth and rural electrification as major concerns of the people.

She indicated her resolve to ensure that the development needs of the people were met.