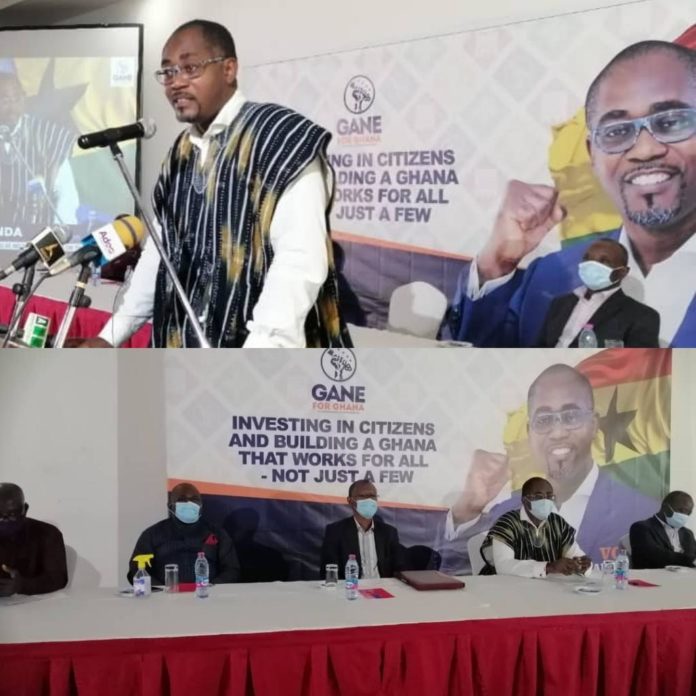 Mr Marricke Kofi Gane, an Independent Presidential Aspirant for the 2020 General Election has stated his commitment to discourage and stop corruption and indiscipline in the governance structure of political Parties.

He therefore, appealed to Ghanaians to vote for him in the December polls to sanitise the system and promote rapid socio-economic growth.

“I have the issue of accountability at heart and I have no fear or favour in dealing with corruption. If anyone fails on corruption in office, the person will be sacked. If there is no discipline at the top, then there is no moral right to bring that to the bottom.”

Mr Gane said this on Thursday in Accra when he officially launched his movement’s manifesto for the General Election, dubbed, “The Ghanaian Agenda”.

The theme for the manifesto is; “Investing in Citizens and Building a Ghana that Works for All of Us, Not Just a Few.”

The movement, called “Ghana Deserves Better”, has a campaign tagline, “Gane4Ghana” and a slogan, “Time No Dey”.
Mr Gane, who is a professional Accountant, said he had no intention of appointing more than 50 ministers when elected into power.

He said his government would enforce sanitation laws and ensure that through public private partnership, plants were built to recycle city-based wastes generated into energy and for other useful purposes.

Mr Gane said, plans were underway to build a technical ground plan to construct large drains within a year in office, adding that his movement had also developed the “Sankofa Project” to identify every pit that was dug as a result of galamsey practices and convert them to farm lands or sites for river bodies.

The Independent Presidential Aspirant, said he deserved the support of the citizens, as he was the candidate concerned with working with professionals and competent people, no matter their political affiliation or religious background.

“I am different because I would be a President who is free from party manipulations and ready to work with anyone competent. An executive with a minimal political interference, a President whose allegiance is not to his party, religion, ethnic group, but to all people in the country,” he added.

Mr Gane also believed the youth was not only the future of the nation, but the most important assets that the nation needed to protect and help to grow.

He said he would therefore change the nation’s learning philosophy from “what to learn” and “how to learn” to a practical, technological, and entrepreneurial form of learning in schools under his government.

Mr Gane said his government would invest hugely in citizen multi-skilling; production, construction, entrepreneur, agriculture, basic technology and customer care, for one to 300,000 participants over a four-year period.

All national youth, employment, and entrepreneurship schemes would also be consolidated for efficiency.

Mr Gane said said “Gane4Ghana”, would move the health sector from a “funeral economy to a preventive primary healthcare system” and provide free menstrual pads for girls between 10 to 20 years in school, who could not afford it.

Mr Michael Kafui Bosompem, the Executive Director of the Coalition of Independent Political Aspirants, endorsed the manifesto and said, “The Ghanaian Agenda” manifesto, would become a beacon of hope for the born and unborn Ghanaian child.