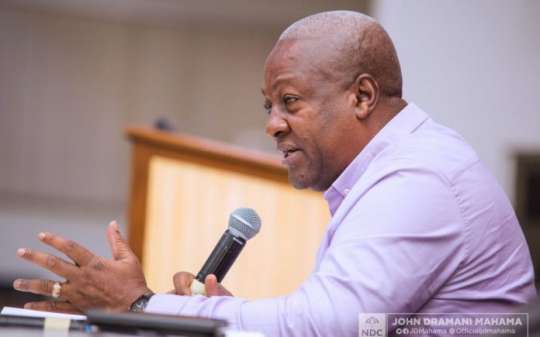 Former President John Dramani Mahama has stated that if he was still in power, he would not have collapsed the banks, but would have placed them in three tiers according to their financial capabilities.

“My administration wouldn’t have collapsed those banks at ago, but would have placed them in Tier A, Tier B and Tier C according to their financial strengths, rather than giving the same standards for all the banks.”

Mr Mahama, who was interacting with Journalists in Accra said the collapse of those banks was a breach of the deliberate attempts his administration embarked on to empower indigenous Ghanaian banks to perform and rub shoulders with their foreign counterparts.

The former President said government’s promise to also pay all depositors their monies was vague as there were no timelines given and challenged government to come out clear on when depositors would receive their monies.

“How can they pay all depositors in full, when that was not catered for in the budget delivered by Mr Ken Ofori Atta, Minister of Finance in the last fiscal budget? Government is being clever in saying they will pay all depositors, after all there were no timelines given.”

He said the collapse of the banks had dented the investment image of Ghana, as it had the potential to scare investors and called on government to take necessary measures that would ameliorate the plight of depositors and investors.

On the introduction of higher cedi denominations, the former President said it was defeating the ideals of the cashless system, as it would now encourage more people to transact their businesses with cash instead of cheques and transfers.

“Printing of higher notes means people can pocket huge sums of monies for transactions, instead of the now preferred cashless system we are preaching.”

He said there was no adequate education on the introduction of the higher denominations, describing it as ‘an ambush’ on Ghanaians.

“We all know that we are not exporting, we are rather so dependent on imports and the basic solution is to export more and import less.”

Bloomberg Reports Cedi Depreciation of 18.21 Percent to US Dollar

Beaches at Korlegonno full of activity despite warnings