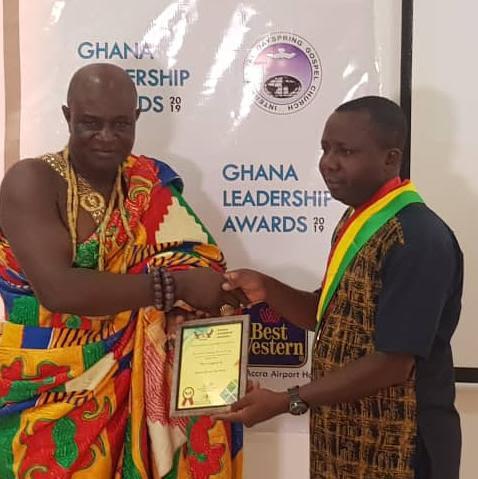 Mr Ibrahim Oppong Kwarteng, a Broadcast Journalist with GBC Radio, has been adjudged the Advocacy Journalist of the Year, 2019.

His award comes on the back of his numerous documentaries, which highlights and sensitizes the public on the various infractions in Ghana’s Criminal Justice Delivery System.

The Awardee’s philanthropic works at the various prisons across the country also merited him the recognition.

The Award held on the theme: ‘The Leadership Future of the Ghanaian and the African Youth’, seeks to celebrate and recognise most outstanding and exemplary leadership that positively impact the development of Ghana and Africa.

The annual event convenes and showcases the highest level of leaders in business, government, academia, philanthropy, and media among others.

Mr Kwarteng, who is also the Executive Director of Crime Check Foundation (CCF), a Crime Prevention Advocacy Organization, commended the organizers for recognizing his effort in the criminal justice system.

He told the GNA that with the understanding that detention in whatever form is injurious to health, CCF had gone beyond the prisons.

He said through their Health Check Series, “we have come to the aid of many Ghanaians, who have been detained in hospitals because of their inability to settle their bills and solicited support for the many others, who require surgery.

“We have also provided prosthetic hands and legs for many children, whose parents have either neglected them or cannot afford medical care for them,” he added.

He said their philanthropy project, premised on the idea that- (there are many in Ghana, who live virtually in prisons outside prison because of poverty) had provided livelihood support for many poor individuals and families.

Mr Daniel Yaw Domelevo, the Auditor General, was awarded Ghanaian Leader of the year 2019 in recognition of his exemplary leadership and achievement in public service.

The Former Minister of Gender, Children and Social Protection, Madam Otiko Afisa Djaba was also honoured the CEO of the year award for her work at the Henry Djaba Foundation.

She established the Foundation in honour of her late father.

The Deputy Communications Minister and also a Member of Parliament for Awutu Senya West in the Central Region, Mr George Nenyi Andah was named the Humanitarian MP of the Year.

Other awardees include Mr Alex Nartey, President of the Judicial Service Staff Association of Ghana and Dr Akwasi Osei, CEO of the Mental Health Authority.

New sachet water prices yet to take effect at Ajumako

Initiative to develop one billion Women Entrepreneurs launched in Accra