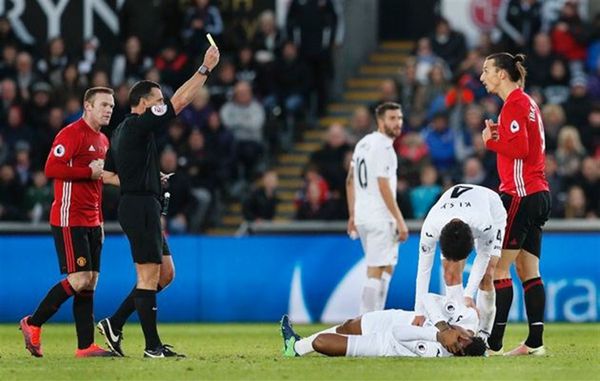 Manchester United’s Zlatan Ibrahimovic has apologized to fans after picking up his fifth yellow card of the season against Swansea City in the Premier League on Sunday, which rules him out of their next game against Arsenal.

The 35-year-old, who scored twice in the 3-1 win over Swansea to help lift his team to sixth in the table, was booked for a tackle on midfielder Leroy Fer in the 76th minute at the Liberty Stadium and incurs an automatic one-game ban.

“I’m sorry I am suspended for the next game. I wish I wasn’t as it’s a game I really wanted to play in,” Ibrahimovic told the club’s website.

“Every time I try to play my game by being strong, and going into the tackles, or whatever it is, I get a yellow card… In England, the football is hard, it’s physical.”

He added he had not registered why he was booked as he was “too tired and did not hear (the referee)”.

The Swede ended his two-month goal drought in United’s win at Swansea City.

A Ghanaian contingent missing after the commonwealth games