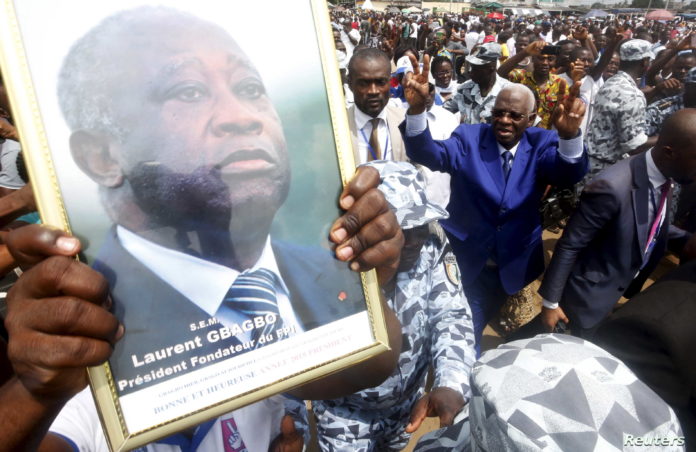 The restrictions that were placed on the former President of Cote d’Ivoire, Laurent Gbagbo, and his ex-Minister of Sports and Youth, Charles Blé Goudé, after being freed on all charges of crimes against humanity, have been lifted.

The trial of the two politicians, for the crimes allegedly committed during post-electoral violence in Côte d’Ivoire between December 2010 and April 2011, started on January 28, 2016.

Upon their unconditional release by Trial Chamber I on January 15 last year, the Office of the Prosecutor appealed against the judgement.

The OTP then asked for conditions to be placed on the freedom of Mr Gbagbo and Mr Blé Goudé while it prepared its grounds for appeal.

Thus, the Appeals Chamber sat on the matter on February 1, 2019 and then imposed limits on the activities of the two men in freedom.

On October 7 2019, counsel for Mr Gbagbo requested the Appeals Chamber to reconsider its judgment and order the removal of the conditions on the release of the former Ivorian leader.

A hearing on this matter was held by the Appeals Chamber on February 6, 2020.

This decision, though, does not relate to the appeal by the OTP against the acquittal of Mr Gbagbo and Mr Blé Goudé.
When the restrictions were imposed, the men were not supposed to “travel beyond the territorial limits of the municipality of the receiving state without the explicit and prior authorisation of the Court”.

In the case of Mr Gbagbo, he was in Belgium, which had accepted him, while Mr Blé Goudé was in The Hague.
The men were ordered to surrender all identity documents to the ICC Registry.

Mr Gbagbo was also required to report weekly to the law enforcement authorities in Belgium while Mr Blé Goudé reported to the Registry.

The travel constraints were imposed because there were fears that Mr Gbagbo would return to Cote d’Ivoire where he still has strong support.

But in relaxing the restrictions, the Appeals Chamber said that any country Mr Gbagbo wanted to travel to would first have to agree to receive him.

With political tension mounting in the run-up to elections in Cote d’Ivoire this October, it would be difficult to see Mr Gbagbo returning home.

When the Appeals Chamber placed the restrictions on the acquitted politicians, legal experts had expressed amazement at the decision.

One international justice lawyer in London told the GNA, in February, last year, after the OTP’s appeal: “This is just a forlorn move by the Prosecutor, given that the ICC acquitted Mr Gbagbo and Mr Blé Goudé because the judges found the prosecution’s case ‘exceptionally weak’.

“What new evidence will the prosecution come up with that will sway the ICC judges to call the two men back to face trial?”