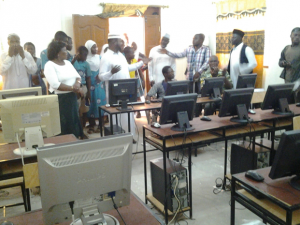 The centre was provided for the Ahmadiyya Primary and Junior High Schools in Bolgatanga. Mr David Aniah, Project Manager of GSPD in charge of the Region , said the ICT centre, which is disability friendly is part of the group’s contribution to society.

Mr Aniah said it is not true that physically challenged persons have to beg for a living and have nothing to offer to society.

He said with empowerment and creation of a conducive atmosphere, they could contribute significantly to the development of society.

The facility which is furnished with computers and their accessories was built with the proceeds from the Association and also with support from its partner, the Dansk Handicap Forbund based in Denmark.

Mr Aniah said the Association has executed similar projects in some parts of the Northern and Upper West Regions and is also supporting about 200 physically challenged persons in Nyariga, Bolgatanga, Bongo Balungu, Tongo and Sumbrungu to go into basket weaving.

“As part of the basket weaving project, centres have been created. The project has also built the capacity of the weavers in the various basket weaving models and trained them in business management.

“It also secured a market for our weavers by exporting the products to Denmark, Sweden, New York and now Southern France,” he said.

He stated that apart from the Association educating its members about human rights issues and periodically providing wheelchairs’ for its members, the weavers had also been trained to form savings and loans associations, where they contribute towards the scheme and often borrow part to expand their businesses.

Mr Aniah called on the government to roll out proactive interventions that would help improve persons with physical challenges and also ensure that public structures are built to suit the needs of such people.

Alhaji Karimu, Regional President of the Ahmadiyya Mission, commended the group for the facility and entreated the students and the teachers to make good use of the facility.

At all the weaving centres visited, the beneficiaries of the basket weaving project lauded the good initiative of the Association and said members could fend for themselves and families, particularly their children’s education through the support of the project.

Saved from Customary Execution: The story of a boy born physically challenged

Albert Frimpong Appeals For Support For The Physically Challenged

PWDs in Bawku trained on financial and business management