News Ghana
Home News “If you don’t acquire a toilet, we will arrest you”, ASHMA threatens... 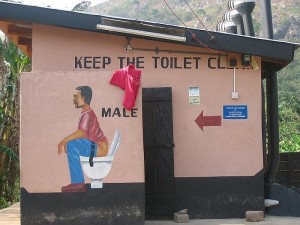 The Ashaiman Municipal Assembly (ASHMA) has threatened to prosecute residents who have refused to build toilets in their households.

Mr Albert Boakye Okyere, Ashaiman Municipal Chief Executive, told the Ghana News Agency that the only way to ensure that residents obeyed the Assembly’s bye-laws to provide their households with toilet facilities, was to prosecute recalcitrant inhabitants.
Mr Okyere therefore issued a two-week ultimatum to residents to start the process of acquiring the toilet facility or be dragged before the law courts for prosecution.

“If you don’t acquire a toilet, we will arrest you and send you straight to court to be prosecuted without passing through the police station”, he emphasized.
He expressed worry that even though the World Bank had made funds available under the Greater Accra Metropolitan Area (GAMA) Sanitation and Water Project to assist residents to acquire household toilet facilities, they had refused to heed to the Assembly’s call for them to get one.

According to him, excuses of lack of money to pay the required half price of constructing a household toilet “ was unacceptable “ as according to him, the money used by households to pay for usage of public toilet facilities could be put together to fund the acquisition of one for the household.
The MCE indicated that residents, especially children and pregnant women in the Municipality stood the risk of contracting communicable diseases from public toilets hence the need to ensure that all households acquired a toilet facility.

A large number of residents of Ashaiman either make use of public toilets or resort to open defecation, a situation the GAMA project aimed to curtail by giving residents the opportunity to acquire a toilet facility at half price.
Even though the July 2018 deadline for the project was drawing near, most residents were yet to take advantage of the project which commenced in August 2014 with the excuse of poverty.
GNA