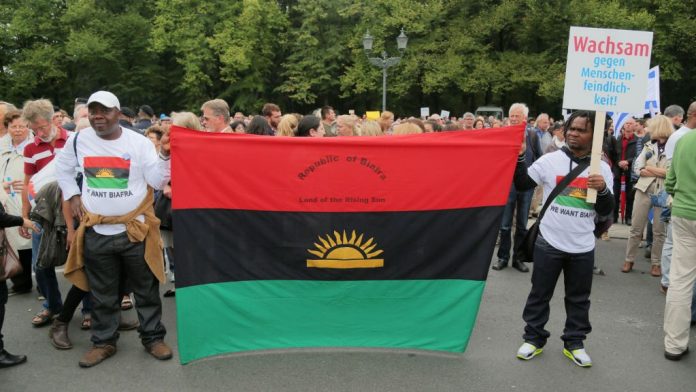 Following the threat to re-arrest the leader of the Indigenous People of Biafra, IPOB, Nnamdi Kanu, by the federal government, Ohanaeze Ndigbo in a statement released to the press on Saturday, 26th August, had accused the federal government of bias as it claimed it looks the other way in its treatment of the Arewa youths who committed serious crime in their issuance of quit notice to fellow citizens living in the north.

Showing support for the Ohanaeze stand, another leading Igbo group, Igbo Renaissance Agenda, IRA, has also lambasted the federal government over what it termed the “undue emotional and physical brutalization of innocent Igbos while treating confirmed terrorists from the north as royals”.

In a statement released Monday morning and signed by Jude Ndukwe, coordinator, and Amaka Ekwo, Secretary, the group wondered why despite the multiple heinous crimes and macabre murders being committed all over the country by Fulani herdsmen terrorists, none of them has either been arrested or prosecuted.

It also questioned why rather than diligently prosecute arrested Boko Haram terrorists, the federal government, in the name of a questionable deradicalisation programme, has taken the ignominious path of releasing them back into the society where some of them have been known to launch even more daring attacks against innocent and harmless citizens.

IRA wondered why northern leaders, elders and youths are so obsessed with Nnamdi Kanu who has never been known to carry arms against the State that they want him destroyed while they protect their terrorist kith and kin who have continuously and violently staged war against the people and the State?

“We find it unacceptable that groups ranked the first and fourth deadliest terrorist organizations respectively in the world are of the Hausa/Fulani stock from the north and are being allowed a field day to kill innocent Nigerians with reckless abandon while Nnamdi Kanu who has been a victim of gross abuse of his rights and the killing of his IPOB members without any provocation or reprisal of any kind on his part is being threatened with re-arrest and his IPOB group vindictively labeled and treated like a terrorist organization that it is not by government officials and Arewa youths who are obviously playing out a script written for them by their elders and leaders,” the group wrote.

The group further stated that it finds it “irrational that the concern of the federal government is to further stoke the heat in an already flaming polity by attempting a needless re-arrest of Nnamdi Kanu rather than look for ways to douse the rising tensions all over the nation.

“Even the UN in a recent release has expressed its grave concern ‘about the proliferation of hate messages and incitement to violence against the Igbo and their property’, yet, no one has been arrested for such treasonable offences. Rather than be arrested, these youths are given generous space in the media through the overt and covert support of governments at various levels to celebrate a quit notice issued to fellow citizens.”

Reacting to the statement credited to the Minister of Interior, Abdulrahman Dambazzau, to the effect that the federal government cannot arrest the Arewa youths over its notice of quit to the Igbo in the north because the youths had confirmed they were quoted out of context by the media, the Igbo group slammed the minister for what it termed “an attempt at being clever by half”. “How could the federal government rely on the claim that the youths were quoted out of context in their failure to arrest the youths when there are video and audio evidence everywhere showing exactly what they have been saying? Can we then confidently say that Nnamdi Kanu and his IPOB group have also been quoted out of context by the media?” the group queried.

While urging all sons and daughters of Igbo to remain vigilant everywhere they are, the group said it is seriously considering commencing processes in the US through some attorneys on the gross abuse of the rights of the Igbo leading to the cold murder of hundreds of them by the Nigerian military.

“We have also instructed our foreign attorneys to commence immediate action against the federal government at The Hague for aiding and abetting crimes against humanity through their neglect, failure and or refusal to arrest Fulani herdsmen terrorists, an action that has led to numerous loss of innocent lives in genocidal proportions, if Nnamdi Kanu’s rights and those of any Igbo son and daughter continues to be violated by the federal government. Any attempt to re-arrest Nnamdi Kanu without allowing the on-going court processes to run its course would surely spell doom for the nation”, it concluded.