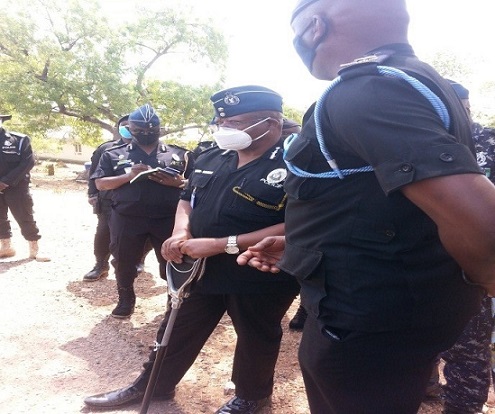 Mr James Oppong-Boanuh, the Inspector General of Police, has assured the general public of the commitment of the Ghana Police Service to give effective security and stem crime in the country.

The IGP acknowledged the high crime wave in parts of the country and the recent upsurge of robbery cases in the Upper East, and said the Police will go to every length to ensure public safety.

He was speaking to the media at Pusunamongo in the Talensi District, Upper East Region, during a three- day working in the region and to visit recent crime scenes in the area.

He was accompanied by a team made up of the Director-General in charge of Operations, Commissioner of Police (COP), Kwaku Boadu Peprah, Director, Operation, DCOP Sayibu Pabi Gariba, ACP Joseph Owusu Ansah (Chief of Staff), and the Director, Public Affairs, Mrs Sheila Kessie Abayie- Buckman.

The IGP said though some interventions had already been put in place by the Regional Police Command in response to the crime situation in the region, he and his team would help review those plans and re-strategize to put measures in place to nib the situation in the bud.

Mrs Abayie–Buckman in response to questions from the media on tomato traders who had suffered attacks from armed robbers recently and other security issues, indicated that, personal safety and security were key and that escort innovations for traders especially tomato sellers from Accra to Kumasi needed to be well organized such that any escort would have to provide security for the fleet of vehicles travelling from Accra to Burkina Faso, “that will give effective escort than travelling individually”.

Last week two drivers en-route to Burkina Faso were attacked and killed at Pusunamongo on the Bolgatanga Tamale highway in the Talensi District.

One of the drivers who was on his way to Burkina-Faso with some traders to cart tomatoes was shot and killed and the traders robbed of various sums of money, whilst another driver carrying cement was also killed at the same spot.

Earlier the IGP and his team visited Katiu, Kalinjilsa No.2, and Sandema in the Builsa North District, where similar attacks on traders had occurred.

Briefing the IGP on the recent robbery cases that claimed one life in the district, the Sandema District Police Commander, ASP Francis Kwesi Amankwaa, said after the Police had escorted traders from Fumbisi to Chuchuliga in the Builsa North District on a market day and had returned to the station, a message was received that other traders were being attacked but when the Police got to the supposed scene, no one was there.

The Commander said a dead person was found on the Katiu road with gun wounds and pellets at that scene, and the body had since been deposited at the mortuary awaiting autopsy.

As part of measures to improve the situation, the Upper East Regional Police Commander, DCOP Osei Kweku Ampofo-Duku has directed that the Police should escort traders to and from market centres.