The laws of Ghana do not allow for light fishing and the security agencies must deal ruthlessly with anyone caught engaging in it, Madam Elizabeth Afoley Quaye, the Minister of Fisheries and Aquaculture Development, has warned. 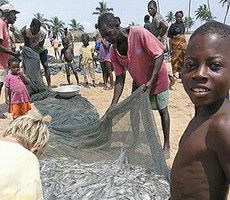 The warning comes in the wake of the use of light to attract fish and other illegal means of fishing including the use of dynamites, all negatively affecting the fishing industry in Ghana.

Appearing before the Appointment Committee of Parliament on Thursday the Minister designate said the illegal practice was done with aggregating device.

After the fishes have been aggregated some obnoxious chemicals, dynamites are poured on the fish in order to capture all the fishes at once.

“This is poisonous to the consumer,” she said and that the Ministry would resource the Ghana Navy with patrol boats to intensify patrols in Ghanaian waters and check the practice.

She announced a Fisheries Management Plan that is being worked on to deregulate the powers of the Fisheries Commission into the hands of the fisher folks to empower them to be watch-dogs and arrest colleague fishers who are engaged in the practice.

She said the NPP Government’s commitment to building landing beaches at Keta Krowor, James Town and 11 other locations across the country.

On premix fuel, the nominee said she was aware of the difficulties with its distribution and would ensure that the laws in the procurement and distribution of premix fuel were enforced.

“We will employ people who will go round the regions to ensure that when the fuel is procured and designated for a particular region, it gets there,” the Minister Designate said.

She announced that investors who would want to enter into pond culture would go for an environmental safety certificate.

On tidal waves, the Minister Designate said the fisher folks would be educated on what to expect and how to handle their equipment when there was tidal waves.

She complained about pair trawlers who went beyond the stipulated industrial fishing all the way in the 30 metre depth breaching laws and called for the necessary action to be taken against such persons.