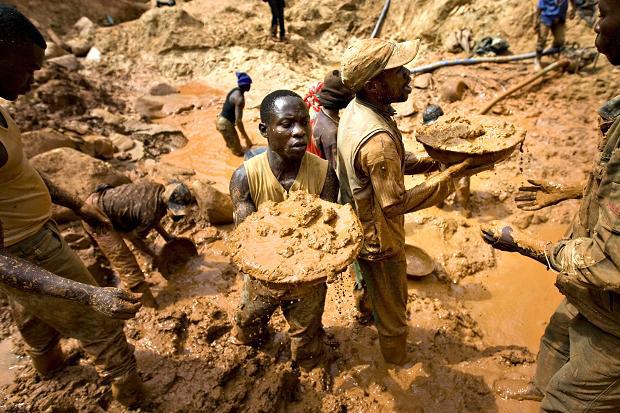 The Banda Traditional Council (BTC) has been assured of the eviction of persons engaging in illegal mining, ‘galamsey’, at Dokokyina, an operational land site of the Bui Power Authority (BPA) in the Banda District of the Bono Region.

Nana Gbankoadi II, the ‘Osiakwanhene’ of the Banda Traditional Area told the media after a closed door meeting between the Traditional Council and the Head of Security of the Bui Power Authority (BPA), General Owusu Ababio, on Thursday.

Accompaning Gen. Ababio to the meeting were Major Francis Ampobi, a Deputy Head of Security in-charge operations, BPA, and Mrs. Mary Konneh, the District Chief Executive and Head of the District Security Council.

Nana Gbankoadi II who deputized for Osabarima Okokyeredom Kwadwo Sito I, the ‘Omanhene’ (Paramount Chief) of Banda and President of the Council, said about 2000 “illegal settlers” from Bole in the Savannah Region had since the last three years occupied the Dokokyina area.

According to him, the settlers had been engaging in ‘galamsey’ (illegal mining) operations, which was a great threat to the sustainability of the Bui Dam.

He said Gen. Ababio gave the assurance that the ejection of the “illegal Gonja settlers” would be effected by Friday, March 27 this year to pave way for the area to be converted to a Military base.

The meeting, Nana Gbankoadi II said, was in response to continuous complaints made by the chiefs, youth and people of the Banda regarding the ‘galamsey’ activities at Dokokyina, which was near the Bui Dam and could consequently damage the Dam.

He expressed worry that the “illegal Gonja settlers” had also occupied ‘Dablaklo’, ‘Accra’ and ‘Dollar Power’ which were parts of the Banda Stool lands but not acquired lands of the BPA by the government.

Nana Gbankoadi II bemoaned the extent of the illegal mining activities in those areas by the Gonja settlers, describing it as devastating and that it could collapse the Bui Dam in future.

He therefore appealed to the government and BPA to extend ejection orders to cover the three other areas, to guarantee the stability and sustainability of the Bui hydro-electric power project.

Mr. Asoma Taylor, leader of the youth at Banda-Ahenkro, told the media in another interview that those occupied areas were “our ancestral homes since centuries ago and we have to protect them for posterity”.

“So for the Gonja settlers to come all the way from Bole to occupy the areas and even install chiefs among them is highly unacceptable because we cannot go to the Gonjaland to occupy their stool lands unlawfully,” Mr. Taylor lamented.

He said the Black Volta River served as the natural boundary separating the Bono Region from the Savannah Region, but the Gonjas have crossed over to occupy “our stool lands to not only deprive us of what is ours but illegally enrich themselves through their galamsey operations”.

Mr. Taylor therefore appealed to government and the BPA to evict them now, since the illegal mining operations alone was against national interest.