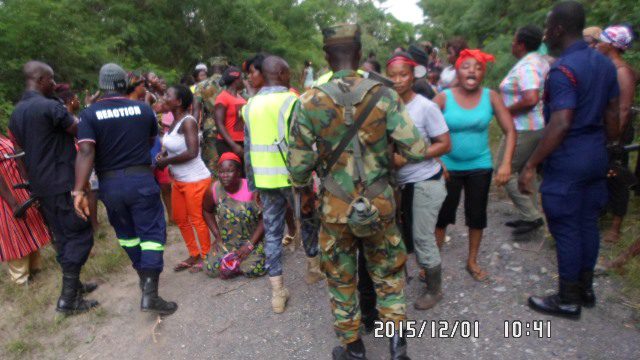 Emboldened by tacit support of politicians and government bodies supposed to maintain law and order, illegal miners took to the streets last Wednesday and Thursday in Obuasi to press their demand for recognition, so that they could work on AngloGold Ashanti concession by any means. Numbering over one thousand and marching side by side with their wives and in some cases children, they demanded certain portions of the AngloGold Ashanti operation be ceded to them. “The serious aspect of this’ lawlessness’ is that these illegal miners are being supported by local politicians and some chiefs who are alleged to have neglected their people and thrown their security asunder for pottage of yams from the illegal miners”, a police corporal said.

The illegal miners claimed that AngloGold Ashanti had promised to offer them part of its Obuasi concession for small scale mining but that promise has not been fulfilled hence “we have taken to the streets to ensure that part of the concession” was ceded to them. The leadership of the illegal miners also claim that they have documents to back their claim, but they are yet to produce them for public verification.

AngloGold Ashanti officials have on the other hand , debunked the claim, saying “we are not aware of any meeting where we discussed the idea of ceding part of the concession to illegal miners. What we know for sure is that any individual or group engaged in exploration, mining and processing of gold in Obuasi other than AngloGold Ashanti is engaged in illegal activity”. The officials explained that the company cannot cede any part of its concession to illegal miners. If anything at all, it has to go the Minerals Commission.

The Obuasi operation is one of the oldest mines in the world and is currently under what they called “ limited operating mode”. Production has been suspended and the company announced last September it was in discussions with credible partners Randgold for the future of the mine, but illegal miners and their supporters seem to have closed their eyes and ears to progress being down to set on the operation in full steam because of greed.

A tour of some areas of the concession show that the illegal miners have already activated access holes which were blasted and sealed by the company at Sanso, Ahansodywodie, Kokotesua and Awhiamu; mining actively under the nose and eyes of the police, municipal security council and the municipal administration. “They are either part of the problem or doing nothing to stop crimes being perpetrated by these illegal miners”. The illegal miners have been sneaking underground, allegedly spurred on by these politicians who had promised safe passage to and from underground.

The genuine fear is that this could be a fetter to attract investors to Obuasi as the activities of these illegal miners and their supporters are creating dis – enabling factors which could affect adversely investors’ confidence in Obuasi. This could delay the reopening of the mine which would also continually affect employment opportunities as well as development and growth opportunities in the municipality, according to Ken Assibey – Boateng , a civil society activist in Obuasi.

“The chiefs, parents, school leavers, churches, Muslims and market women, just to mention only six, are all waiting for the rebirth of the mine for the growth and development an business and social opportunities in the clock back municipality and even beyond but few galamseys and their heir patrons are working irresponsibly to turn the clock back”, he said.

The government’s dislike of the activities of illegal miners took a positive step three years ago when officers and men of the national task force stormed Obuasi and the adjoining districts to eradicate illegal miners, including the Chinese and other foreigners, heavily engaged in the illegal business. The exercise, successfully reduced illegal mining in Obuasi but in recent times , it is gradually resurrecting.

The people in the Obuasi communities, fearing that the resurrection would truncate their rights, peace and security in the municipality, suggest the intervention of the task force once again to contain the menacing problem, as Opayin Kwesi Amoah puts “The current administration has woefully proved incapable of maintaining law and order . The police is not doing much to fight increasing indiscipline in the municipality; why don’t we send the task force to rescue us”.

Simply the people in the communities, having suffered for far too long from the activities and horrors of illegal mining want the task force to show up a obuasi.