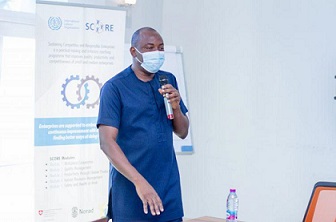 The International Labour Organisation (ILO) has trained its implementing partners, under its Sustaining Competitive and Responsible Enterprises (SCORE) programme, to ensure gender equality at the workplace.

The two-day training, which ended on Thursday, focused on educating social partners, opening up the space and making implementing partners of SCORE understand issues that underlined gender equality.

Mr Samuel Aseidu, the National Project Coordinator of ILO in Ghana, said the organisation aimed to create equal opportunities and inclusivity for both men and women at the workplace.

“The contributions of both males and females at the workplace often have higher productivity and performance levels than the one dominated by one single-sex,” he said.

Mr Aseidu said the programme was to empower social partners to put in place good policies to regulate how issues of gender equality were considered for enhanced productivity.

He said the SCORE programme was a global strategy aimed at promoting best practices, productivity and inclusiveness at the workplace for SMEs.

The ILO was working to stimulate discussions and encourage enterprises to develop policies that would create equal platforms for both men and women, he said.

“It is not for the benefit of women, it is for the company’s benefit because ultimately they are going to get the best from both men and women,” he said.

She said such policies helped organisations to diversify not only on gender equality but other areas such as employment of different ethnic groups.

Mrs Wiafe-Asinor said the SCORE programme ensured that after the training, organisations moved further to implement and take actions on gender equality policies.

She said the ILO agenda was to champion the gender equality programme and to create the awareness and insight for organisations to understand the benefits of practicing gender equality at the workplace.