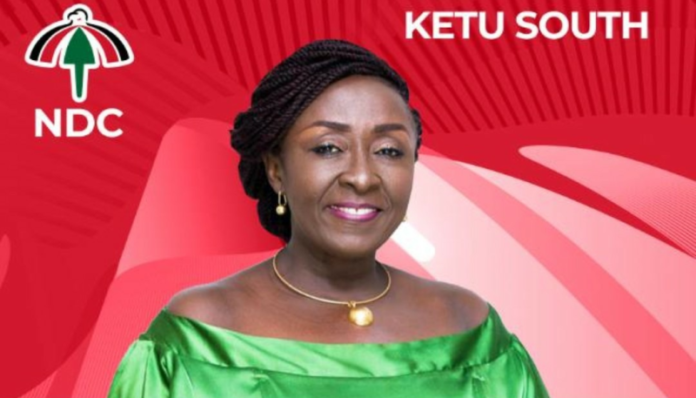 Madam Abla Dzifa Gomashie, the National Democratic Congress (NDC) Parliamentary Candidate (PC) for Ketu South, has appealed to constituents to vote for her for the desired change.

She said as a woman who had served as a Deputy Minister and currently a development queen in the Constituency, she knew the problems of the people, young and old, male and female, able and disabled and that being their Member of Parliament (MP) would put her directly in charge of affairs to make decisions for the common good of all.

Speaking in an interview with the Ghana News Agency, Madam Gomashie said the time was ripe for Ketu South to have a female MP as the Constituency and all others in the southern part of Volta Region never had a woman represent them in Parliament.

“I can impact lives and bring the change you want. The fact that I contested in the primaries and won is in itself, a crack in the ceiling for women empowerment. From Akatsi North and South, North, Central and South Tongu, Ketu North and South, and Keta and Anlo Constituencies, we never had a female MP since the Fourth Republic,” she said.

Madam Gomashie said women had the natural tendency to make a difference in the same situation as men, adding “that’s what I’m talking about, a feminine touch. We’ve always been sending our men to Parliament, send a woman this time.”

The former Deputy Minister for Tourism, Culture and Creative Arts who had through her organisation, Values for Life-Ghana (VFL-Ghana) impacted countless children, youth, and women in education and economic empowerment pledged to put “the interest of Ketu South first and represent them with dignity, openness and accommodating spirit so that together, we can address our avowed hopes and aspirations.”

She called on the citizenry to join in the rescue mission by voting for the NDC’s flagbearer, Mr John Dramani Mahama to end the hardship in the country with his policies and programmes that would bring back hope and accelerate development.

Mr Kennedy Awuye, a resident, said the PC was always in touch with her people since the 90s and that her love and commitment in projecting Ketu South in the socio-cultural and political space in Ghana was legendary.