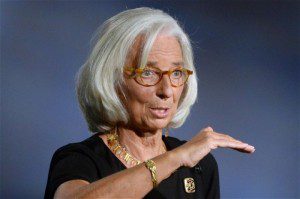 The International Monetary Fund has granted Guinea, Liberia and Sierra Leone debt relief of about $100 million in total, the first time a global institution has provided such relief to the three West African nations hardest hit by the Ebola outbreak.

The IMF, urging similar action from other international creditors to help the countries deal with the economic fallout of the deadly epidemic, additionally offered the nations $160 million in zero-interest loans, subject to board approval.

The number of new cases of Ebola rose in all three countries last week, the World Health Organization (WHO) said this week, ending several weeks of encouraging declines across the region.

?Those three countries are going through a very, very dramatic ordeal that combines pandemics, the risk of isolation? and the potential of the virus to spread, IMF Managing Director Christine Lagarde told reporters. ?Which gives it a very broad scope and constitutes a significant threat.?

The United States first proposed that the IMF offer some debt relief to the three impoverished West African countries to enable them to spend more on government services and their economies.

The IMF normally offers loans, not grants. However, alongside the announcement Thursday, it established a special catastrophe trust to offer grants to countries hit by epidemics or other natural disasters.

?Essentially, a global social safety net is now in place to protect the least developed countries when they experience disasters,? said Eric LeCompte, executive director of the Jubilee USA Network, which campaigns for debt relief for poor countries.

The $100 million grant would allow each country to service their IMF debts over the next two years, the Fund said.

The Group of 20 major economies had urged the IMF last year to provide $300 million in funds to help stem the Ebola outbreak and support the three West African countries.