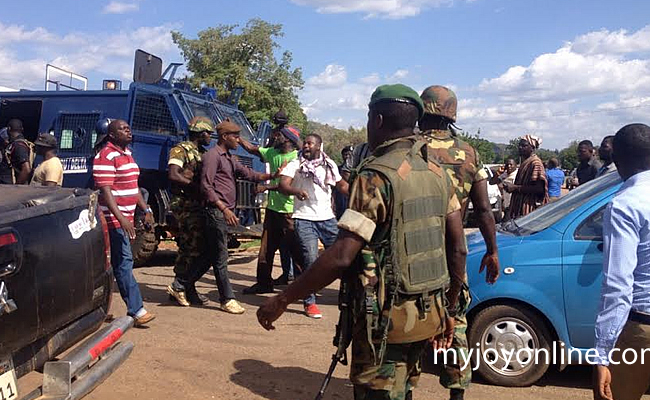 I write to you the security services as a former colleague officer of the Ghana Air Force, conflict analyst, peace advocate and patriot deeply troubled by potential outbreak of violence in the December 7 2016 elections. The proliferation of weapons, electoral violence, recent Ghanaians’ penchant for violence, vile rhetoric by the political elite and distrust of the Electoral Commission are signals of the coming danger.

Unfortunately the threat is quietly shaping along the dreaded ethnic fault lines. The stakes are high because Ghana’s flawed democracy promotes corruption and accompanying political violence is rewarded. The more the violence, the better the rewards.
The security services remain the people’s only hope to save Ghana from imminent disaster. But they will be successful if they are honest, firm and impartial. Unfortunately the corrupt police have failed Ghanaians with their incompetency, timidity, partiality and selective justice in responding to rampant electoral violence. Despite the despicable widespread inter-party violence, internationally condemned attack on NPP presidential candidate’s house and Collins Dauda’s brother’s admittance of killing people every day, there has been no arrests and prosecutions of violators to deter others. As a result the cycle of impunity continues.
The Chief of Defense Staff Air Marshall Michael Samson Oje, my former senior colleague Air force Officer, has assured Ghanaians the readiness of the Ghana Armed Forces and sister security services “to safeguard the sanctity of Ghana’s democracy”. Brigadier General Cosmos Alhassan , General Officer Commanding the Central Command of the Ghana Army, my former course commander at the Ghana Military Academy, has also affirmed the alertness of the Armed Forces to avert violence.
The Ghana Armed forces has international reputation for peacekeeping and conflict resolution and most of its personnel, including the author, have experiences in violent civil wars such as Rwanda and Sierra Leone and its devastative ramifications. These conflicts testify that there will be no winners in a war; all of us will be losers. I am confident none of us wants a war in Ghana. The onus now falls on the Ghana Armed Forces and sister security services to ensure Ghana’s peace. I am glad to hear of the readiness of the Ghana Armed Forces to avert violence but its success will depend on its professionalism and impartiality. I want to remind the security services that they owe allegiance only to the people of Ghana who you swore to protect by land, sea and air. Ghana’s sovereignty resides in its people and not political parties or political elite. I urge you to be impartial and do not act against the will of the people. Historical examples of Burkinabes, Ivoirians and Egyptians demonstrate that the will of the people cannot be suppressed by intimidation. Do not underestimate the force, capacity and tenacity of the masses in protecting their will as the Egyptians, Ivoirians and Burkinabes showed. The world has reached a historic epoch where the will of the people reigns supreme and no amount of force will deter them from protecting their will. The world is watching and December 7 will test the professionality, integrity, impartiality and patriotism of the security services. Do not succumb to the manipulations of the powerful “invincible hands” of the political elite to compromise your responsibility to the Ghanaian people and the nation. I am confident you will not fail them.
My advice is to go the Egyptian way and side with the people rather than the political elite and execute your national duty without fear or favor. To the violence thirsty political party supporters and masterminds, be cautioned that you may lose your precious lives or be held accountable by the international community for crimes against humanity or war crimes as occurred to former Ivorian president Laurent Gbagbo and Liberian president Charles Taylor. Ghanaians must seize their destiny in their hands and demand peace through disobedience of unlawful commands and peaceful mass demonstrations. “BEWARE OF THE IDES OF DECEMBER 7”. GOD SAVE GHANA

Ghana’s Peace Will Be Strengthen Through Vigilantism Bill