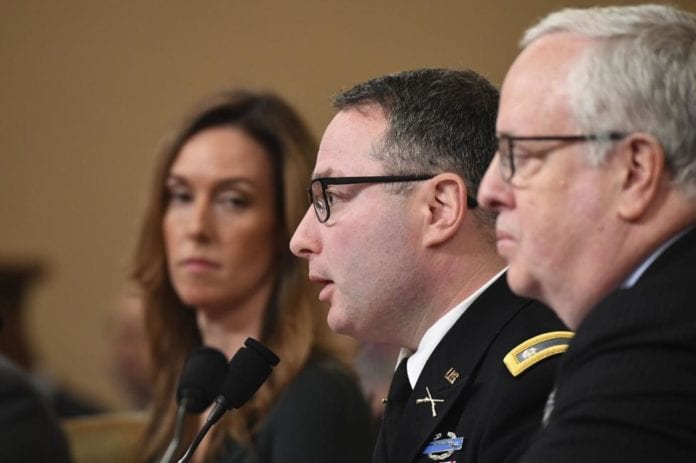 The second week of the House impeachment investigation of President Donald Trump is scheduled to begin Tuesday with four more witnesses.

The chairs of the House intelligence, foreign affairs and oversight committees last weekend released transcripts detailing joint depositions of both Williams and Morrison. The chairpersons said their testimony showed the July 25 phone call between Trump and Ukrainian President Volodymyr Zelensky “immediately set off alarm bells throughout the White House.”

Vindman will appear before investigators after having testified in a closed-door deposition last month. He monitored the phone call between Trump and Zelensky, and said in his previous testimony Trump undermined national security by asking Ukraine to investigate political rival Joe Biden and his son, Hunter.

“I realized that if Ukraine pursued an investigation into the Bidens and [gas company] Burisma, it would likely be interpreted as a partisan play, which would undoubtedly result in Ukraine losing the bipartisan support it has thus far maintained,” he said.

Vindman also testified that he didn’t know the identity of the whistle-blower who made the initial complaint about Trump’s call.

Williams, Vice President Mike Pence’s special adviser on Europe and Russia, confirmed an account by Vindman that Zelensky specifically mentioned Burisma, a Ukrainian gas company that Hunter Biden worked for, during the call — contrary to a transcript of the call released by the White House.

“My notes did reflect that the word Burisma had come up in the call, that the president mentioned Burisma,” she said in her deposition.

Williams also said Trump had asked Pence not to attend Zelensky’s inauguration, as previously planned.
The second hearing will feature Volker, who the panel chairs have identified as having “played a direct role” in arranging meetings between Trump’s personal attorney Rudolph Giuliani and Zelensky aides.

The whistle-blower’s complaint stated that Volker flew to Ukraine with U.S. Ambassador to the European Union Gordon Sondland to advise Ukrainian leadership about how to “navigate” the demands Trump had made of Zelensky.

The committee chairs said his October. 3 deposition showed the progression of Trump and Giuliani using the State Department to pressure Ukraine into conducting investigations of the Bidens to advance the president’s personal and political interests.

During his deposition, Volker told the committees he found the decision to withhold funding to Ukraine “unusual” and was unable to receive an explanation for why it was held. The aid was ultimately released on Sept. 11.

Morrison said in his deposition last month Sondland told a Ukrainian official the United States would release the aid if Kiev investigated the Bidens. He added, however, that he didn’t find Trump’s actions inappropriate or illegal.

“It was the first time something like this had been injected as a condition on the release of the assistance,” Morrison said. “So it was not something I had been tracking as part of our process for calculating how do we get the president the information he needs to make the decision that it was within American interest to release the assistance.”

Sondland, Morrison and U.S. Ambassador to Ukraine William Taylor have all said in their testimony Trump withheld the aid as a means to persuade Ukraine to investigate the Bidens. Trump has previously said the two actions were unrelated.

Holmes told investigators last week in his deposition he heard Trump ask Sondland about Zelensky’s willingness to cooperate and investigate the Bidens. Hill provided her deposition on Oct. 14.

Trump Calls on Other Countries to Join Nigeria in Banning Twitter

Trump: Why Nigeria Should Explore A Bipartisan INEC

Half of Americans want Senate to convict Trump

Four years later, much of Obama’s policy has survived Trump