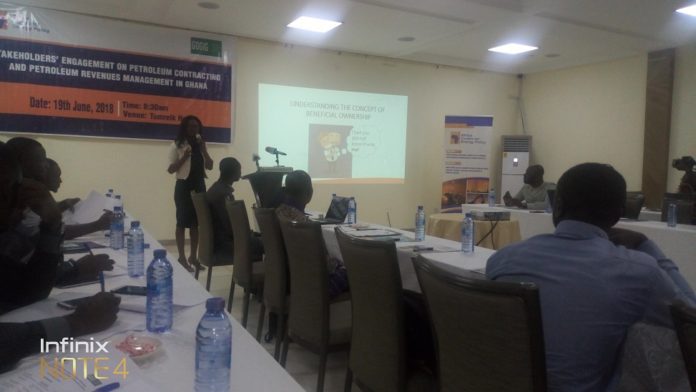 Linda Ahunu, Policy Analyst at Africa Centre for Energy Policy (ACEP), has revealed that, each year an estimation of $1 trillion goes down the drain amid corrupt and illegal cross-border deals in developing countries.

She explained that, this happens as a result of the numerous companies without a clear ownership. She indicated that, in Ghana alone, close to $2.1billion was lost to tax evasion annually between the period of 1970 and 2008.

According to her, due to illegal trade in petroleum products in the downstream sector and tax evasions, Ghana lost an estimated amount of GH¢850 million in revenue in the year 2016.

She however, called for the implementation of beneficial ownership framework which can save the country from losing huge sums of monies and the many other investments costing the state. This She said, calls for a concerted efforts by government, agencies and other stakeholders to salvage the country.

She made these assertions in her presentation at a stakeholders forum on the need for beneficial ownership in the extractive industry, petroleum contract, and petroleum revenue management law manuals at the Tomrik Hotel, East Legon, Accra.

She said the concept of beneficial ownership is very important, because it identified all persons who have significant control over a company as well as being recipients of company’s profits.

To this end, Linda Ahunu noted that, all stakeholders must come together to find ways and means to solicit for funds to support the Registrar General’s Department for the successful implementation of the beneficial ownership disclosure framework.

The Head of Policy Unit at ACEP, Ms. Pauline Anaman, also in her presentation noted that, the disclosure of a contract document wasn’t good enough but then, a broader concept of open contracting whereby the information about formulation, award, execution, performance and completion of upstream contracts are disclosed publicly.

According to her, government should enact the Right To Information (RTI) law, which will cut off all the restrictions and pave way for citizens to get access to every information in government.