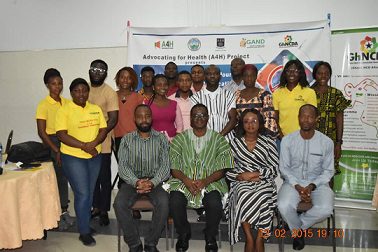 The Ghana NCD Alliance (GhNCDA), a civil society organization has advised the general public as a matter of urgency to reduce the intake of Sugar-Sweetened Beverages (SSBs).

Since the consumption of these sugar-sweetened beverages is the major cause of dental caries, obesity, diabetes, stroke, and several other non-communicable diseases (NCDs).

The National Coordinator of the GhNCDA Mr. Labram Musah made this known at a sensitization Seminar held for Journalists on the Public Health Implications of Sugar-Sweetened Beverages (SSBs) in Accra.

The seminar was aimed at educating the journalists about the health risks associated with excessive SSB consumption in order to help champion the Advocating Health (A4H) Project since GhNCDA recognizes the media as a powerful advocacy tool.

Mr. Labram Musah, also frowned against the manner in which SSBs manufacturers bombard the general public with appealing and persuasive advertisements, which portray SSBs as a glamorous and fun pastime by using trusted individuals, celebrities, and well-known personalities.

Adding that, the SSBs industry’s CSR activities are making the SSBs brands and products famous, popular, and increasing consumption.

He said, an increase in SSBs consumption will, directly and indirectly, be an obstacle to the achievement of the SDGs especially Goals 1, 2, 3, 4, 5, 8, and other related development goals; hence there is the need for the government to consider putting heavy taxes on these products to make them unattractive.

Stressing that Ghana cannot afford the epidemic proportions of the NCDs levels as the health care system cannot take care of people who were sick, urging public health nutritionists to intensify the campaign to protect the health of the citizens.

Professor of Public Health, Amos Laar, at the University of Ghana delivering a presentation on The A4H Project: Concept and Motivations, explained that aims to identify a realistic legal pathway to enact SSB tax in Ghana.

Stressing that,  the World Health Organization (WHO) has endorsed health taxes as part of evidence-based strategies for the prevention and control of NCDs.

However, he stressed that the A4H Project will generate, curate, and avail evidence to support advocacy, scholar activism, and counter opposition from food & beverage industry actors among others.

This project is a collaboration between Academia led by the School of Public Health, University of Ghana, Legon, and Civil Society Organizations (CSOs) in Ghana led by Ghana NCD Alliance (GhNCDA), Ghana Public Health Association (GPHA) and Ghana Academy of Nutrition and Dietetics (GAND).

“Mexico’s 10% tax on sugar-sweetened beverages resulted in a 5·5% decrease in sales by the end of the first year, and a 9·7% drop in sales in the second year, with the largest decrease amongst the most socioeconomically disadvantaged.

In Chile, the SSB tax was able to reduce the monthly purchased volume of the higher-taxed, sugary soft drinks by 21.6%. The announcement of the imposition of an SSB tax urged manufacturers in Thailand, the United Kingdom, Portugal, Malaysia, and South Africa to reduce the sugar content of their products,” he disclosed the evidence.

Professor Amos Laar urged citizens to follow health safety protocols and refrain from drinking sugar-sweetened beverages in order to be healthy and productive.

A Founding member of the Ghana Academy of Nutrition and Dietetics (GAND) Madam Helena RNutr, touching on the Health Hazards of Sugar-Sweetened Beverages (SSBs) noted that excessive consumption is linked to several chronic diseases and malnutrition.

According to her, while some drinks claim to be high in vitamins, antioxidants, and other healthful ingredients, they are often high in sugar. Therefore, moderating SSB consumption can be important to overall health and well-being.

“Excess sugar consumption is associated with weight gain. As Obesity is linked to an increased risk of developing many chronic diseases, including stroke, type 2 diabetes, osteoarthritis, and gallstones.

Overweight and obesity prevalence is set to cost the global economy 3.3% of GDP by 2060. Currently, a direct relationship between SSB intake and cancer has not been observed.

However, being overweight and obese has been associated with several forms of cancer, including cancers of the breast, colon, rectum, endometrium, esophagus, kidneys, and pancreas.

Consumption of SSBs increases the risk of developing type II diabetes mellitus. According to data gathered during the Nurses’ Health Study II, women who consumed one or more SSBs per day had an 83% higher relative risk of developing diabetes when compared to those who rarely consumed sweetened drinks,” she explained.

Mr. Essel Francis Cudjoe, a Person Living with Diabetes who shared a heartbreaking experience of how he battled with ailments, also seized the opportunity to advise all and sundry to refrain from drinking sugar-sweetened beverages as they increase the risk of contracting diabetes and other diseases in humans.

GRA fortifies its borders to halt the smuggling of alcoholic products