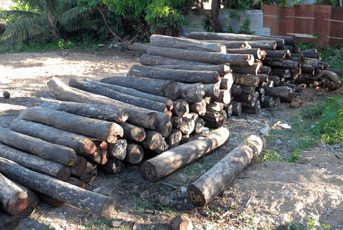 The District Chief Executive (DCE) for Sekyere Central, Mr. Kwadwo Banahene Bediako, has ordered that articulator trucks loaded with teak logs, believed to have been illegally cut from a forest at Beposo, be impounded.

The trucks should not be allowed by the police to leave with the logs until investigation to establish how these could be extracted without relevant documents, showing authorisation by the appropriate state institution.

The alertness of the assembly member of the Beposo East electoral area, Mr. Samuel Kodua, led to the arrest.
He had challenged the man, who brought the trucks to the place to cut the logs to produce proper documentation before entering the forest but was ignored.

He was, however, undaunted and decided to check with the Mampong District Manager of the Forest Service Division (FSD) of the Forestry Commission (FC), Mr. Kwame Donkor, if he was aware of what he suspected was an illegal activity.
There, he was told that the timber contractor was in Accra, working to secure the relevant documents.

Dissatisfied with the explanation of the FSD officials, he reported the matter to the DCE.
When contacted by the Ghana News Agency (GNA), Mr. Donkor declined to speak with the excuse that he had submitted his reports to the head office of the FSD in Accra.
GNA