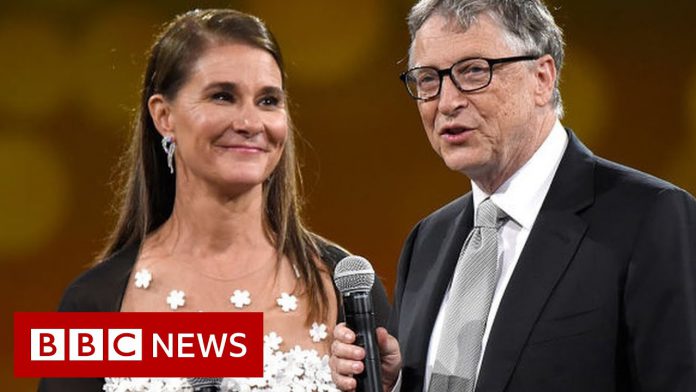 With the Bill and Melinda Gates divorce bombshell still echoing, so begins the process of divvying up the fourth-largest fortune in the world.

Forbes puts the Microsoft Corp. co-founder’s net worth at just north of 130 billion dollars, a massive sum that includes the world’s largest private family charitable foundation, a lucrative personal investment firm and a collection of real estate that rivals any in the country.

In addition to 242,000 acres of farmland, the couple own a glut of mansions across the country that they’ve been compiling for the last three decades, including homes in Washington, California, Montana and Florida.

Their most impressive estate sits in Medina, a small Seattle suburb whose claim to fame is that it shelters the Microsoft co-founder as well as Amazon CEO Jeff Bezos.

Depending on how the divorce proceedings play out, the futuristic smart house – which boasts a 60-foot swimming pool, library with secret doors and trampoline room – could potentially surface for sale.

According to divorce documents obtained by TMZ, the couple asked the court to divide their assets based on a separation contract and do not mention a prenuptial agreement. The document was filed in King County, Washington – a key detail because Washington, along with California, is one of nine community property states.

In community property states, divorcing couples are required to equally split all assets acquired during their marriage, said Colleen Sparks, lead family law attorney at Talkov Law. Because the Gates bought all their homes after their 1994 marriage, neither can claim complete ownership of any piece of property.

If Bill and Melinda can’t reach a compromise to buy the other out of the Medina mansion, Sparks said, a court could force a sale of the home, bringing to market one of the most notable estates in the country.
It’s fairly common for separating couples to sell the homes they owned together, and there’s plenty of precedent in the celebrity-filled realm of Southern California real estate.

Notable pairs that put property on the market post-divorce include Katy Perry and Russell Brand, Heidi Klum and Seal, Ryan Reynolds and Scarlett Johannson, and Christina Aguilera and Jordan Bratman.
“Generally when there are this many properties involved, the owners will end up selling at least some of them. But the Medina house would likely be the last to go,” Sparks said.

Ellen Griffith, a real estate agent who deals with divorcing clients, said that because every house the Gates own was purchased after their marriage, it should be a 50/50 split.

But, as always, it comes to down who has the best lawyers.

“They can both afford the best of the best,” she said. “It’ll be an interesting battle.”

Both soon-to-be exes will have to look into the fair market value of each house, the capital gains tax they’d be forced to pay if they sold and the expenses that arise from maintaining the properties should they choose not to sell.

The Gates’ divorce documents request a trial date for April 2022, but Doppelt predicts they’ll pursue private mediation to stay out of the public courts.

In addition to their main home in Medina, the Gates own three California homes. In 1999, they shelled out 12.5 million dollars for 13,600-square-foot spot in the resort city of Indian Wells, records show.

They made another splash in 2014, dropping 18 million dollars on Jenny Craig’s 229-acre horse farm complete with four 30-stall barns and a three-quarter-mile dirt racing track.

Their priciest purchase in California came last year when they paid 43 million dollars for an oceanfront home in Del Mar with 120 feet of beachfront. It was the second most expensive home sale in San Diego County history.