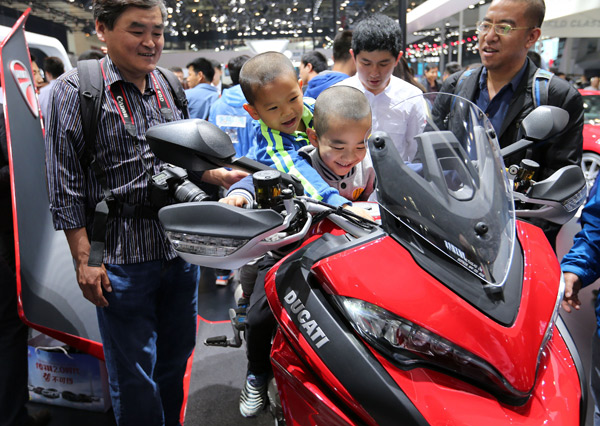 Two boys sit on a motorcycle at an auto expo in Beijing. [China Daily]

China’s growing consumption will continue to bring opportunities to companies in many industries as the country’s middle-income population grows rapidly in the next 15 years.

According to a report released on Wednesday by The Economist Intelligence Unit, the portion of the population defined as middle-income will grow from 11 percent in 2015 to 36.9 percent in 2030 while the share of high-income consumers, with annual disposable income of more than 200,000 yuan ($32,100), will rise from just 2.6 percent last year to 14.5 percent in 2030.

Wang, who wrote the report, said that the incremental gain in Chinese private consumption in the next 15 years will be bigger than the entire consumer economy of the European Union today.

“From this angle, consumption will definitely be the leading engine of China’s economic growth and will play an increasingly important role in future as China’s economy slows,” she said.

This will bring both challenges and opportunities for businesses.

“Since China’s market is big enough, a company which finds one place is full of competition and hard to make profit in may turn to another region to expand the market. However, in some industries-automobile for instance, the competition is already extremely fierce, which might be challenging for new investors,” she said. “It seems that the time when a company can make a fortune from one single product has gone forever.”

The products need to be innovative to attract consumers. Chinese high-income consumers tend to buy healthier food, high-end cars and their tourist destinations are changing from neighboring countries to places such as Italy and France where there are rich cultures to experience or areas like Africa to explore, she said.

“As a result, businesses related to those sectors will be prosperous,” Wang said.

Ding Zhe, an accountant at a construction company in Beijing, said he started to buy organic food and top brand outdoor equipment since his salary increased to a certain level.

In the past decade, Chinese consumption patterns have changed dramatically. The report said the most notable change has been a reduction in the proportion of spending on basic necessities.

Chinese expenditure spent on food, beverages and tobacco has fallen from 37 percent in 2005 to 30 percent in 2015.

As incomes increase, consumers spend across a broader range of categories including automobiles, clothing, household electronics and jewelry.

Even so, China’s consumption level is still in its early stages at present, and is equal to the US level 30 years ago, Wang said.

“The consumption structure and economy is stable in the US, which supported the country’s consumption,” she said.

However, the gap between China and the US will gradually narrow in the following years, she added.