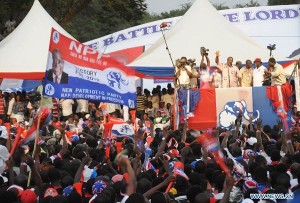 He said the people of Ghana needed leaders who were servants and not arrogant ones who sought to be served when put in a position of authority.

“ There are a growing number of people who consider themselves to be consumers, rather than givers; they come to power to be served not to serve others, he stated. “When called upon to serve they rather complain and point a finger at people who they think are not doing anything.”

“Such attitude does not please the Lord and is without a reward…we are to serve with gladness, thanking the Lord for an opportunity to serve,” Rev. Canon Nelson said at an inter-denominational thanksgiving service of the New Patriotic Party (NPP) for the victory at the December 7, 2016 Elections.

The event, held at the Accra Sports Stadium, was attended by the President-elect, Nana Addo Dankwa Akufo-Addo, his Vice-President-elect, Dr Mahamudu Bawumia, party chieftains, the Clergy and members, and sympathisers of the Party.

Rev. Canon Nelson whose sermon was centred on ‘Thankfulness,’ said arrogant leaders were not thankful because they failed to acknowledge that their resources, intellect and others wealth were gifts from God.

Rev. Canon Nelson, however, assured the President-elect Nana Addo and those who would form his government that their security was from God and that they should be thankful for peace and for how far God had brought them

To Ghanaians, Rev Canon Nelson said the change they wanted would only materialise when they changed their attitude at work, in their professions, and in the society at large.

“The change we seek can only happen by all of us changing our attitudes… the corruption, greed, lazy attitude to work; I don’t care attitude, the pilfering in our offices, the lack of maintenance of government property the nepotism, our tribalistic attitudes and the Ghana time mentality,” he told the thousands who had thronged the event.

“These are attitude that we have to change because if we have called for change and we don’t eschew all these negative attitudes in our lives, the changes can never happen.”

Before his sermon, Rev. Victor Kusi Boateng, the Founder of the Power Chapel International, asked for corporate prayers to bless Nana Addo and his team with wisdom, knowledge, understanding and the technical know-how to accomplish their mission.

Rev. Josh Laryea, who represented Dr Mensah Otabil of the International Central Gospel Church, prayed for a great future and divine blessing for Nana Addo’s administration to impact positively on the destiny of Ghana.

Rev. Aboah Ofei of the Akropong Presbyterian Church, prayed for peace, divine favour and for loyal people and hard working people to assist the President-elect to bring excellence to his to his governance of the country.

There were readings from the Book of Psalms on Thanksgiving and Exaltations of the Lord by Mr Freddie Blay, the Acting National Chairman of the NPP, the Minority Leader of Parliament Osei Kyei Mensa-Bonsu and Nana Addo, respectively.