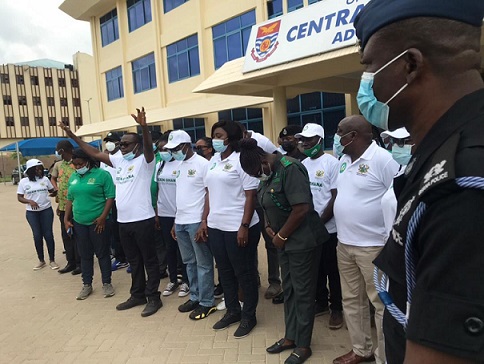 Mr Michael Pentsil, the Central Regional Manager of the Forest Services Division has entreated stakeholders, corporate bodies to make tree planting and forest protection part of their training and mentoring programmes to inculcate that habit in the youth.

He said forest preservation was vital because trees played diverse roles in human lives, including; the provision of fresh air for breathing and mitigating climate change as well as economic values for national development.

Speaking with the Ghana News Agency (GNA) after planting a tree seedling at the Regional Coordinating Council (RCC) and the University of Cape Coast respectively, Mr Pentsil was optimistic that degraded forest could be restored with rigorous afforestation.

He said the youth must be trained to become responsible future leaders to continue and expand the afforestation projects being carried out currently at various locations in the country.

The Greening Ghana project was launched in March 2021 by Mr Abu Jinapor, the Minister of Lands and Natural Resources to address environmental menaces such as deforestation, illegal mining and chainsaw operations and their attendant ramifications that are robbing the nation of its water bodies, forest reserves, wildlife habitation and other natural resources.

The project also seeks to ensure the restoration of wildlife habitats and forest reserves by planting trees in communities and along water bodies.

Mrs Justina Marigold Assan, Regional Minister after planting her seedlings charged various Metropolitan, Municipal, District, Chief Executives (MMDCES) to support the project by making sure the planted trees were nurtured and sustained in their communities.

She stated that the future was bright and the unborn generations and young must be advocates of Green Ghana initiative to protect the environment for other useful purposes like relaxation centers, tourist sites to generate income to the government.

That would boost the economy and the target of Sustainable Development Goals (SDGs) could be achieved in due time, she indicated.

Mrs Assan urged religious and traditional leaders to be at the forefront of the planting project to encourage and motivate the populace to get involved in the process.

The Central Region would plant about 550,000 trees out of the five million trees to be grown across the country.
Some Ghana Black Star players took the opportunity to join other relevant stakeholders to plant trees at the UCC campus to support the Green Ghana project.