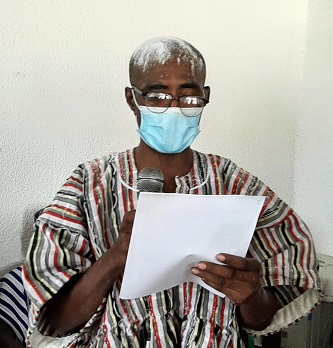 Mr Gerard Ataogye, the re-elected District Chief Executive (DCE) for the Kassena-Nankana West District Assembly says he will work to justify the confidence reposed in him by President Akufo-Addo.

“Clearly, the President’s confidence in re-nominating me has been amplified by the massive endorsement witnessed. Kudos to our Assembly Members and all those who worked tirelessly to ensure this successful exercise.”

Mr Ataogye in his victory speech after he polled 60 “Yes” votes representing 93.75 per cent and four “No” votes, representing 6.25 per cent said, “Today’s successful confirmation marks another mile stone in the history and development of the Kassena-NankanaWest District.

“I will work with diligence to justify the confidence reposed in me by the President and the good members of this House to achieve the vision of the President by ensuring all-inclusive governance for accelerated development of this beloved District of ours.”

The re-elected DCE recognised that a good number of qualified citizens from the District expressed interest in the position of DCE for the area, and assured all contenders for the position that he would operate an open-door policy to embrace all the good plans and visions they had for the development of the District.

“After all, we are all one people from the same family with a common goal,” Mr Ataogye said.

He called on all residents in the District to exert their energies to fighting poverty and work towards the development of the area, saying, he would collaborate with the Assembly Members and the traditional authorities to mobilise adequate internally generated funds to implement their development agenda.

Mr Ataogye thanked President Akufo-Addo for re-nominating him and expressed gratitude to the Paramount Chief of the Paga Traditional Area, Pe Charles Awia Awampaga II, Mr Thomas Addah Dalu, Member of Parliament (MP) for the Chiana-Paga Constituency, and the Assembly Members for the support.

In an interview with the Ghana News Agency (GNA) after the confirmation process, Mr Dalu, the MP for the area emphasized the need for unity in the District, and said the confirmation of the incumbent DCE indicated that the Assembly Members worked well with Mr Ataogye and wanted to continue working with him.

He was hopeful that the effective collaboration between them would translate into the development of the area to improve the living conditions of the residents.

There was a heavy security presence at the venue led by the Deputy Commissioner of Police (DCOP) Alex Amenyo, the Deputy Regional Police Commander, and District Commanders from Paga and Navrongo to ensure a peaceful exercise.

Assembly Members in 12 out of 15 Municipal and District Assemblies in the Upper East Region have confirmed President Akufo-Addo’s nominees, while nominees for Garu, Binduri, and Tempane Districts were rejected.