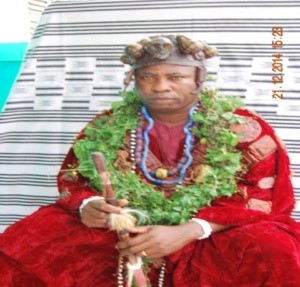 The chiefs and people had undertaken a clean-up exercise at Teshie Landing Beach in surbun of Accra.

He said the situation had deprived the community of social-amenities while the people faced unemployment and poverty.

“As the saying goes the devil finds work for the idle hand; so the youth have indulged in anti-social activities like the use of hard drugs, hooliganism and what have you.

“The children of school-going age are roaming the beaches while the area lagged behind in development as compared to its neighbours like Nungua and La,” he said.

In an exclusive interview at the sideline of the clean-up exercise to set the ball rolling of the indigenes of Teshie to eat and drink in remembrance of their forefathers the legitimate who, hailing from the appropriate family and lineage, Teshie Mantse Gbetsↄↄlↄ Nii Ashitey Akomfra III, lamented that Teshie is believed to be the last of the six Towns to be established in the Ga State.

The areas are; Education and Development, Health and Sanitation, Poverty Alleviation and Wealth Creation, Cultural Modernisation, and Traditional Arbitration.

The town is situated about 8to 10 kilometres between the economic and industrial cities of Accra and Tema. Beingtypical fishing community, the natives of Teshie are predominantly fishermen and are very famous for their dexterity and industry as seafarers. Teshie-mei are very forthright in “calling a spade a spade” consequently, their neighbours call them “Akro made O kpoo” people.

According to Ledzokuku-Krowo Municipal Assembly sources (2000) Teshie has a total population of 171,875 and occupy the ninth position in Ghana in terms of population density. Out of this total population 44.3% are Ga/Adangbe, 34.8% are Akan, 12.8% are Ewe and 9.5% for the other minute immigrant community.

All the heads of the 5 Quarters have equal status as Divisional Chiefs and owe allegiance to the Teshie Mantse who doubles as the President of the Teshie Traditional Council.

In the pre-Ga era, Teshie ranked best among the six Ga Towns as a super-power with a huge military presence in the Anglo, Akwamu, Fanti and the Katamanso Wars. Because of its military exploits in the defence of the Ga State, Teshie earned the accolade: “Gonti ni ashiii see anmoo kpoye Ga”.

This accolade is symbolised by a clenched fist and an out-jutting thumb which is the emblem on the Teshie War Flag. It is therefore not surprising at all that Teshieaccommodates many strategic security installations including the Headquarters of the Southern Command and the Kofi Annan International Centre for Peace Keeping and Training Centre.

Apart from its military exploits, Teshie also became famous for the diversity of its human and materials resources which made it the most revered icon on the world map. Firstly Tetteh Quarshie, who happened to be the third son of Nuumo Mleku-Boi of Teshie Tsiewe, received international acclaim for the importation of Cocoa beans from Fernando Po to Ghana. Today, Cocoa does not only reign as the highest foreign exchange earner of Ghana but has also become the most preferred household delicacy on dining tables in every part of the globe. Again, the skilfully crafted Coffins of Kane Kwei became the must see exhibits at high profile international fairs and museums in Germany, Copenhagen, London, Paris and Moscow. Furthermore, in 2016 Teshie became the first Town in Ghana to host a Private Medical School. Significantly,the opening ceremony of this historical Medical School wasmarked by the presence of asitting President and two ex-Presidents of the Republic of Ghana.

Acconding to him, Homowo is a period of merry-makingfollowing an extended period of draught which confronted the Ga-Dangmes during their long trek from Sudan to their present settlements. Homowo means “hooting at hunger” andis likened to the Passover Feast of the Hebrews. Thespecial meal for the occasion is steamed-unfermented cornflour and palm-nut soup.

Being the last of the 6 Ga States, Teshie is the last Towns to celebrate itsHomowo Festival. This was a very smart military arrangement by the founding fathers to forestall the incidence surprised attacks by the enemies of the Ga States.

While the people of Ga Mashie were revering and merry-making the other Gatowns lying to the east wouldremain alert and on standby to repel any attacks by enemies. The baton is then passed over to Nungua and subsequently to Osu, La and finally Teshie.

Nii Akomfra III said the Teshie Homowo festival is a period of stock-taking, reconciliation and sober reflection on the past, the present and future. It also serves as a social control mechanism where virtue is rewarded and vice issanctioned by means of songs by minstrel or “Kpa-shimo” groups. In times past, a song would be composed to ridicule a wrong doer by the minstel group.

This group would carry the wrong-doer shoulder high and go on a dzama procession throughout the streets of the Teshie singing the song composed in his stead. As a result of this public shaming, the wrong-doer will die before the next Homowo Festival.

The flags which have been mounted behind the high table represents the main “kpashimo” groups namelyKorle Woko, Gbee-ni-matele, Tafo Ye Feo, Akro Greece, Ghana and Jah Labour, just to name a few. These groups are led on their dzama procession by the cult of Tsese. The Tsese is a woden bowl with filled with water and herbs and carried on the head. The content of the Tsese is believed to be imbibed with strong spiritual powers.

Therefore people with all manner of problems will throw coins into the Tsese to coax the carrier to pour a little of the content on them. By so doing, they get answers to their spiritual problems. The Tsese is seen in public on only two occasions during the year i.e. the Kpa-faa and the Tesebumo which effective brings the public events to a close.

The Teshie Homowo Festival is the most interesting, entertaining and variegated festival in Ghana. The street carnival alone attracts several thousands of both foreign and local participants thereby offering marketing opportunities to all classes business including the beverage industry, the food joint operators, show biz industry, the fabric and sportswear industry, transport operators and more.
Stressing that the theme for Teshie Homowo is “Harnessing the social, cultural and human resources of Teshie for the development and growth of the people” as very appropriate.

To realize this laudable objective the Teshie Traditional Council is partnering Orange Communications for the Re-branding and Marketing of the 2017 Homowo Festival. We urge all prospective sponsors to work with the Agency to ensure a mutually beneficial celebration.

“ I wish to make a passionate appeal to all residents of Teshie to religiously observe the period for the Ban on Drumming and noise-making from Monday, August 7, 2017 to Saturday, September 2, 2017” Nii Akomfra III.

Also wish to make a special appeal to our Christian Brothers to join us to devote the period for the Ban on Drumming and Noise-making for deep meditation and prayers so that peace and prosperity may be restored to our dear community.