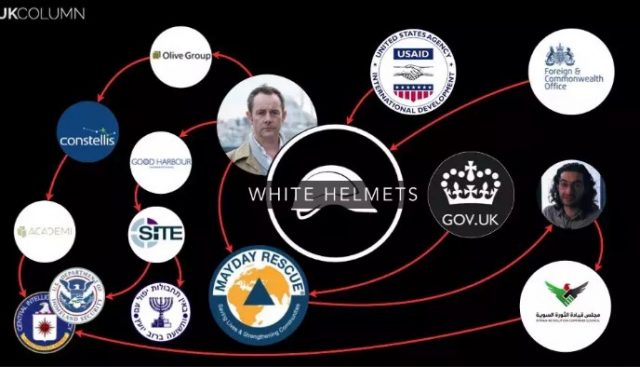 Introduction
April 7, 2017, between 3.42 a.m. and 3.56 a.m., a massive missile rocket attack was carried out by U.S.S. Ross and U.S.S. Porter from the Mediterranean Sea near Crete Island. The destroyers launched 59 Tomahawk cruise missiles at the Syrian airbase Al-Shayrat in Homs province.According to the U.S. statement that the Syrian Air Forces allegedly used this air base for carrying out an attack on Khan Sheikhoun, has become an official excuse for the aggression, resulting in at least 100 civilians killed and more than 400 injured. The town of Khan-Sheikhoun is located at about 50 kilometers to the South of Idlib province. This territory has been under the control of Jabhat al-Nusra since 2014.

Chronology
April 4, at 8 a.m., Abdullah al-Gani and Muaz al-Shami, freelance journalists who have links with radical groups located in Idlib, provided Orient News and Al-Jazeera with the video footage made by the White Helmets. The graphics show the consequences of the alleged chemical attack in Khan Sheikhoun. According to Muazz al-Shami, sarin gas was used in the attack. The White Helmets is an organization that has been repeatedly discredited. It has direct links with Jabhat al-Nusra and Al-Qaeda. The actual aim of the organization is to stage fake photos and videos in order to demonize the current Syrian government and the Syrian Army. 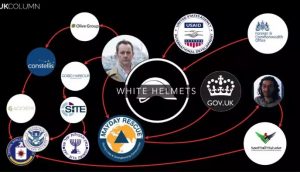 At 10.00 a.m., the National Coalition of Syrian Revolutionary and Opposition Forces claimed that as a result of the chemical attack carried out by the Syrian government forces more than 54 civilians had been killed and at least 80 wounded. Most of the injured civilians were evacuated to the Turkish hospitals in Gaziantep.

Meantime the information about the use of chemical weapons has quickly started to spread overseas through mass media and social network.
At 09.25 a.m., Jobar News became one of the first media sources shared the information of the alleged chemical attack. The media source blamed the government forces for using sarin, and claimed that around 40 people were injured.

At 10.41 a.m., British-based Syrian Observatory for Human Rights spreadthe information that the Russian jets had used chemical weapons in Idlib. They also claimed that 58 people were killed.

At 11.08 a.m., Reuters posted the same information referring to the Syrian Observatory For Human Rights.
At 12.30 p.m., Al-Masdar reportedthat the Syrian Arab Army had destroyed the rebel’s chemical weapons depot in Khan Sheikhoun.
At 4.30 p.m., Al-Masdar News doubted the fact that sarin chemical attack was conducted. In order to prove this version, the agency presented some photos and videos with the White Helmets providing first aid to injured people without using any individual protective gear. In addition, the behavior of the White Helmets activists was too calm for such an emergency situation which also looked suspiciously. It seemed that it was a not well-staged performance.

Reaction of Mainstream media
The Western media sharply reacted to the alleged chemical attack in Khan Sheikhoun
April 4, 3.00 p.m., Paris urged to organize an emergency meeting of the UN Security Council to discuss this issue.
Later, UN Special Envoy for Syria, Staffan de Mistura, stated that he had already discussed this barbarous situation with Federica Mogherini. He also called on the UN Security Council to hold a session with the aim to find the guilty side.
The Foreign Ministries of Turkey, Germany, Canada, the U.S., France, the U.K. and also NATO Secretary General strongly condemned the alleged chemical attack in Syria after that.

Meanwhile, Russia and China advocated justified and objective investigation into the alleged use of chemical weapons in Syria.
The American ambassador to the United Nations, Nikki Haley, blamedthe Syrian government for the ‘chemical attack’ during the UN Security Council session. 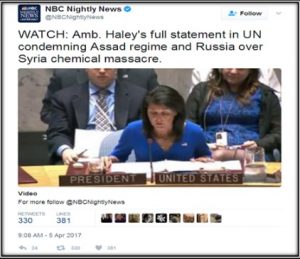 Debunking the Myths
What happened?
Our experts thoroughly analyzed the materials spread by the mainstream media used to justify the U.S. attack on Al-Shayrat airbase. We provide you with the arguments that there was no chemical attack.
Arguments
First
To accuse the Syrian Air Forces of using chemical bombs the mass media published photo below, demonstrating the fact of chemical attack 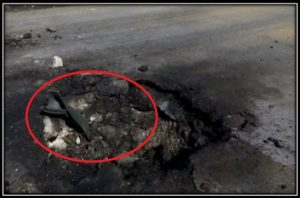 The type of ammunition presented in the photo does not apply to any airborne or chemical weapons. There are any tail fins or other identifications. Probably, that was a handcraft mine or another kind of metal ware that didn’t belong to any weapons.Hence a question arises: why did the government troops use handcraft chemical weapons? Besides, there is only one small crater that can’t be considered as consequence of an air strike.
Second
The White Helmets activists were trying to demonstrate us the primary symptoms of the organophosphorus poisonous substances effect, namely, miosis or corestenoma. However, this attempt was unsuccessful and we can see the opposite effect of the mydrias on the photos. Such an effect may be caused by narcotic or psychotropic drugs
This version was confirmed by experts from the Swedish Doctors For Human Rights Organization, who pointed out that the children shown in the videos were unconscious and under the influence of psychotropic substances. 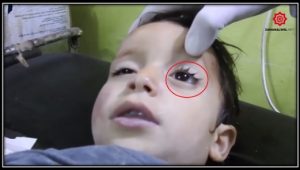 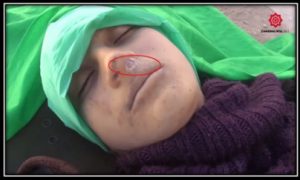 On these photos there are no any symptoms of mild and moderate degrees of severity, such as abundant salivation, lacrimation and nose discharge.
The filmmakers attempted to demonstrate the discharge from nose, but such a weak degree does not have anything in common with sarin gas.
Fourth 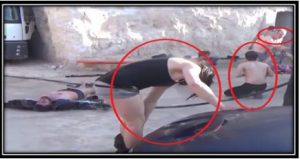 The video shows the White Helmets activists trying to demonstrate us severe poisoning instead of the medium and moderate poisoning, when people are able to stay in consciousness, sit independently, move and perform other actions. Besides, vomiting, urination, fecal discharge and severe convulsion poisoning are typical symptoms for severe poisoning. There are no such symptoms on presented photos.
Fifth

The vaporous sarin gas is easily sorbed by porous structure such as textile materials, wool, wood, brick and concrete. This toxic agent is also absorbed by painted surfaces and rubber products, which causes the danger to a person emerging from the contaminated environment, as well as people who can be near or contact them.
It should be mentioned, that the ‘activists’ help injured people without using such personal protective equipment as gloves and gas mask.
The presence of respirators on their faces proves the weak awareness in the sphere of military chemistry among the film-makers. The vapors of sarin gas are affecting not only through the nasopharynx, but also through the mucous of eyes. Therefore, if any poisonous substance were actually used, a person without means of protection would definitely be contaminated if came into the contact with affected substances like cloth, wood, clothes. Instead, we see healthy, energetic and vigorous ‘rescuers’.
Moreover, the presence of a person in a gas mask who doesn’t take part in the action raises questions. He only points out the cameramen what to shoot. Who is he and why don’t other activists have such gas masks? 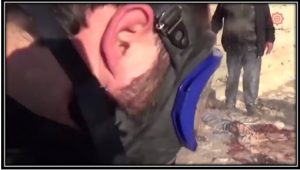 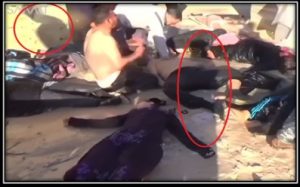 At about 11:00 a.m., various pieces of video where victims remaining in critical condition, were washed and taken to an unknown destination, were published. According to the elongated shadows, the video was made no later than 9. 30-10. 00 a.m., a few hours before the strike of the Syrian aviation. 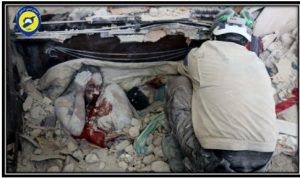 At 11.30 a.m.-12. 30 p.m. (judging by almost complete absence of shadows) was realized another video footage in the camp of the militants, located to the east of Khan-Sheikhoun, where we can see a consequence of strikes on the air base. These were no persons affected by the alleged chemical attack on the video. At the same time we can see a great number of dead bodies. But where were those who had suffered from the ‘chemical attack’?
Seventh
There were almost no women among the victims of the attack. Most of injured people were men and children, and all the women were dead. If the footage was fabricated, it can be assumed that there were no women at the pictures, because according to Muslim tradition, a man mustn’t touch women.

The woman’s body. She is dressed, in spite of many other injured people are undressed. No one touches her. 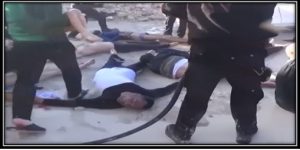 Injured men. They are undressed, washed and turned over.
The actions of the White Helmets rescuers
We have to repeatedly point out that the White Helmets is an organization producing fake films with elements of fiction, and it has some links with terrorists.
It is a cheap falsification and there are some other facts.

In the pictures, the actions of the ‘rescuers’ look extremely unprofessional: one of them was randomly washing the victims with water, allegedly washing away chemical substances, while others were given them artificial ventilation
According to the video, one of the White Helmets members takes the injured child and runs with him towards the wasteland for some purpose. Also in the picture we can see how he slowed down after the scenes with his participation was taken.

In addition, it is unclear, why the ‘rescuers’ are laying out the bodies of injured children and adults in front of the cameras, instead of providing them with medical assistance as soon as possible?

When Did the U.S. Administration Take the Decision to Attack the Al-Shayrat Air Base?

The U.S.S. Porter had been on duty in the Mediterranean and the Black Seas since November 2016. The ship equipment can keep a lot of data on objectives to be destroyed within the area of its duty. It is also able to prepare flight missions for the Tomahawk cruise missiles directly on board.
The U.S.S. Ross has the same operational capabilities. April 3, 2017, she left its permanent location in the Rota naval base, in the South of Spain, and in 72 hours accompanied by the Porter arrived at the designated missile launch area in the East of the Mediterranean Sea
It is notable that the Ross was deployed in the mission area on April 3, 2017, before the Syrian aviation hit on the targets of terrorists in the settlement of Khan Sheikhoun.
Such a maneuver made by the U.S. ships proves the attack on the Syrian air base was a premeditated operation.
Before the alleged chemical attack the Western mass-media had been creating informational background repeatedly accusing the Syrian army of using chemical weapons against militants and civilians. April 4, 2017, the staging of chemical attack of Syrian Air Forces against civilians in Khan Sheikhoun was conducted.
As far as the readiness for launching cruise missiles for the U.S. Navy destroyers is up to 8 hours, after conducting information campaign in Khan Sheikhoun the future of Al-Shayrat air base has already been predetermined
Conclusion
All the facts prove that the decision to attack the Syrian military infrastructure was taken in Washington long before the fabricated events in Khan Sheikhoun. Besides, the film-shooting is a staged falsification aimed at creating an information cause for cruise missile attack and to justify the U.S. aggression against Syria.

by Adel Karim, for NewsGhana.com.gh

This report represents the independent investigation on the chemical attack allegedly carried out by the Syrian Air Forces in Khan Sheikhoun, in Syria’s Idlib. It provided a pretext for the U.S. Navy cruise missile attack at the Al-Shayrat airbase in Homs. Adel Karim is a Lebanese independent journalist with a focus on Middle East issues. You can find his articles in Beirut Observer.