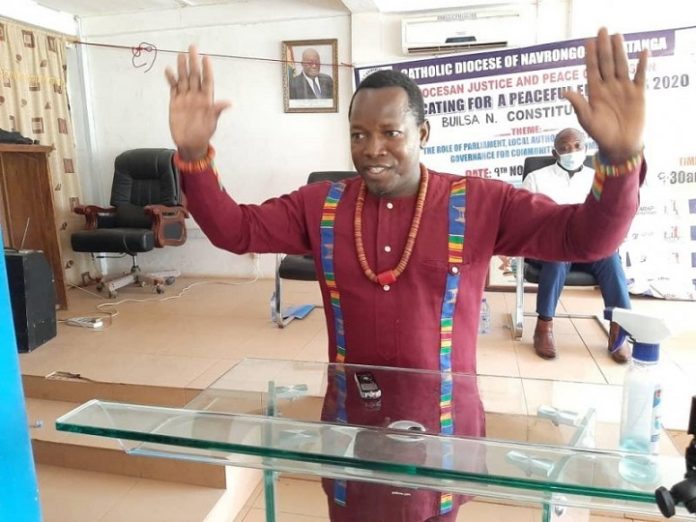 Mr Simon Gibson Achavuusum Anuegabey, an Independent Candidate contesting the Builsa North Constituency seat in the Upper East Region has stressed the need for traders in the Sandema market to do so under proper hygienic conditions.

Speaking on how he would improve the health of the people of the Builsa North Constituency at a debate programme if given the mandate as their Member of Parliament (MP), he said “When I look at the market where our women trade, we don’t have potable water and that makes my heart bleed.”

The debate, organised on the theme: “The role of Parliament, local authorities and participatory governance for community development,” was at the instance of the Justices and Peace Commission in collaboration with the National Commission for Civic Education (NCCE).

The programme was supported by the European Union and the Konrad Adenuer Stiffing, a German Non-Governmental Organisation, and attracted Parliamentary Candidates from the Peoples National Convention (PNC) and the National Democratic Congress (NDC).

Parliamentary Candidate for the New Patriotic Party (NPP), Mr James Maurice Abakisi was not present at the programme.

He said not only the main Sandema market would benefit from the borehole, but it would be extended to all five markets across the Constituency and added that apart from the plan to provide potable water for traders, he would also work to ensure that decent toilet facilities are provided in the market.

Mr Anuegabey expressed concern about the lack of infirmary in the Sandema market to handle minor injuries and illnesses of people in the market, and said it was his desire to ensure that the Constituents were healthy.

An infirmary in the market, he said would immediately offer first aid treatment to victims of any medical illness or accidents in the market before referral to the District Hospital for further management.

The Independent Candidate said he would collaborate with the District Assembly and the District Health Directorate to provide health professionals to ran the infirmary, especially on market days, “These are some of the things that I am planning that if I become a Member of Parliament, I will do.”

Touching on security, Mr Anuegabey said given the mandate, he would engage stakeholders in the District to form para-security group in the Constituency to assist the Police fight crime since the number of police personnel were few.
He said Senior High School graduates who were part of their various school cadets, and were yet to further their education, could be recruited into the para-security group to help officials of the Ghana Police Service in to fight crime in communities within the Constituency.

Mr Anuegabey said the lack of street lights along some major roads which plunged portions of the District into darkness, was a fertile ground for incidences of robbery attacks, especially on market days, “I will make sure that when I become Member of Parliament we will supply street lights on major routes.”