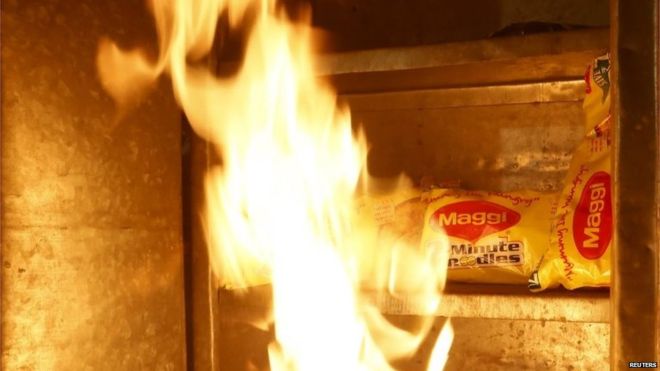 The complaint against Nestle is that it caused damage to consumers through misleading advertisements related to its Maggi noodles product.

Maggi was banned in India after the food safety regulator accused Nestle of not complying with food safety laws.

Nestle has challenged this at the Bombay high court, saying its products are safe.

But the company, which has 80% of India?s instant noodles market, has already destroyed 400m tonnes of Maggi products.

The claim, made on behalf of Indian consumers, was not filed through the courts but with the National Consumer Disputes Redressal Commission (NCDRC), which has semi-judicial powers.

A Nestle spokesman in Delhi told the Reuters news agency that the company would only be able to ?provide substantive response? after it received an official notice about the complaint filed to the NCDRC.

The Food Safety and Standards Authority of India (FSSAI) had earlier said that tests deemed the instant noodles to contain ?unsafe and hazardous? amounts of lead.

Nestle says that its noodles are safe as seen in the results of tests conducted in other countries, including the US, Britain and Singapore.

Two Indian laboratories in the western state of Goa and the southern city of Mysore also recently cleared the noodles, but the findings were dismissed by India?s food safety authority, saying there were lapses in the tests.

The Bombay high court verdict on the case is expected soon. It has reserved its order, but has suggested that samples of Maggi noodles be re-tested. Nestle has agreed, but the safety regulator has responded negatively.

?There is no provision for such a testing according to the law, we will not follow a different procedure because of Nestle,? the lawyer for the regulator told the Indian Express newspaper.

The news of legal action has caused a stir on Indian social media. The tag ?Rs 634? ? a reference to the amount of the damages the government is seeking (634 crore rupees which is 6.34bn rupees) ? has begun trending on Twitter.

Most have asked whether the large amount of compensation that has been sought on behalf of the consumers would be redistributed to everyone who ever ate Maggi.

Strike: Government and UTAG to engage further after meeting NLC

TUSAAG calls on Government to implement conditions of service fairly