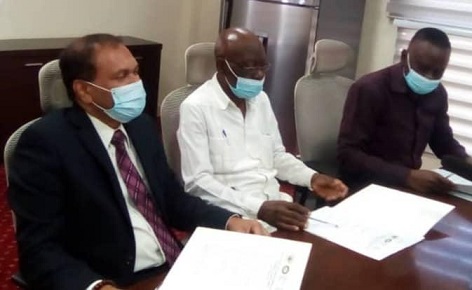 Mr Sugandh Rajaram, Indian High Commissioner to Ghana has held discussions with officials of the Northern Development Authority (NDA) to explore areas of collaboration for the benefit of all.

Discussions between the High Commissioner and the officials of NDA centered on capacity building, technology transfer, and support for the agricultural sector to improve the livelihoods of the people in the northern part of the country.

Mr Rajaram, who visited the offices of NDA in Tamale for the discussions, expressed the commitment of Indian institutions to partner with the NDA to ensure technology transfer to improve economic activities in the northern part of the country.

He said technological transfer and capacity development between the two countries were paramount in boosting the growing economy of Ghana, adding his office would motivate Indian technology developers in agri-business, animal husbandry, and fisheries to replicate their expertise in the northern part of the country.

Mr Boniface Gambila, Acting Chief Executive Officer of NDA said the northern sector, over the years, had faced numerous development challenges that required both local and international collaboration to address.

He, therefore, appealed to the Indian High Commissioner to consider collaborating with the NDA in the area of agriculture, which was the fundamental tool in achieving the vision of zero poverty in the area.

Mr Gambila mentioned other critical sectors where the expertise of the Indians was required as traditional herbal medicine, climate change, anti-snake venom vaccines amongst others to facilitate growth and development.

Dr Hakeem Wemah, Board Chairman of NDA expressed optimism that the dialogue between the NDA and the Indian High Commissioner would enhance the NDA’s vision of accelerating the economic and social development of the northern sector of Ghana.