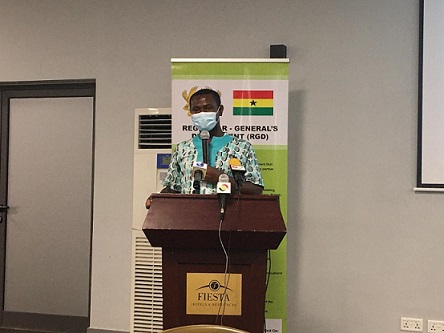 Mr Bekoe, said disclosure of their status in the registration details to the Registrar-General’s Department (RGD) would reduce the control and influence of PEPs in the civil service.

He said it would also ensure that the necessary rules related to procurement were applied to prevent conflict of interest.

A PEP is anyone who has been entrusted with or owns a prominent public position like politicians, political party executives, government appointees, certain high levels of civil servant positions, Military, Police, security services, among others.

Mr Bekoe gave the advice during a media workshop organized by the RGD on the concept of BO Information, held in collaboration with the United Kingdom (UK) DFID funded Strengthening Action Against Corruption (STAAC) programme and the BOSS Team.

A Beneficial Owner is an individual who directly or indirectly owns or exercises substantial control over a person or company.

He or she is the person on whose behalf a transaction is conducted; or who exercises significant control or influence over a legal person or legal arrangement through a formal or informal agreement.

Therefore, a Beneficial Owner of an entity is a person who will enjoy the economic rights stemming from the entity, regardless of whether the person is also the legal owner on record- that is, whether the entity’s ownership is registered in his or her name.

“Once a PEP is managing a public office, it is important for the public to know whether that office is being managed fairly and transparently to prevent abuse of that office for personal gain.

“So whenever we are asking for who the true owners of your company are, it is important you indicate it.
“As such, whenever there is any procurement being carried out in Government, the PEP will remove himself or herself from the entire process in case his or her company is involved in that particular procurement,” he said.

He said as part of the ways to deal with conflict of interest, a PEP can recuse himself or herself for another to take over or in extreme cases, he or she can resign.

Mr Bekoe said in order for a PEP not to have influence over a procurement deal, it was best for the particular business deal to be taken away from his or her department and given to another, where the PEP had no influence.

He added that by extension, any immediate family member, particularly spouse, children, siblings and parents of a PEP automatically assumed the same status.

“It has been defined to include every person in Government who holds the position as a Director or a position equivalent to that of a Director.

“This is because in the civil service, the Director normally takes major decisions including procurement.”

“Companies shall within 28 days of making the entries submit to the Registrar for registration. The register of members is open for inspection by members and any other person on payment of a reasonable fee,” she said.