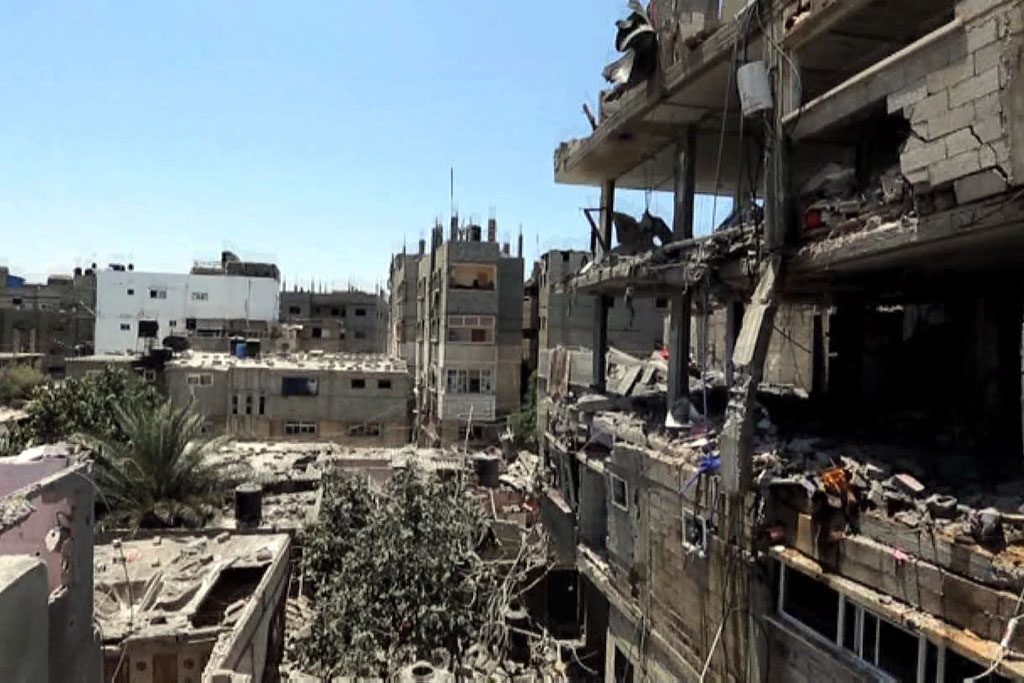 In the Palestinian Gaza Strip, archaeologists estimate that about one hundred archaeological houses in the seaside enclave need conservation, a task they describe as tricky due to the lack of necessary government support.

Attempts to preserve ancient houses are almost made by individual initiatives amid severe poor economic and humanitarian conditions caused by Israel’s 13-year blockade on the territory.

One of these initiatives was launched several months ago to restore a 120-year-old house by Jihad al-Ghoul, a young Palestinian man in his twenties.

Leaning on his crutch, al-Ghoul painted murals of ancient Arab artists and singers, and carved sculptures from the Palestinian heritage on other walls.

The 28-year-old man, who lives in al-Bureij refugee camp in central Gaza Strip, was injured in an Israeli raid on the coastal enclave in 2008, which led to the amputation of his left leg.

“My initiative is based on a deep belief in Gaza’s beauty and its archaeological and historical status,” al-Ghoul told Xinhua, noting that urban expansion poses an imminent danger to ancient houses in Gaza.

The house that al-Ghoul is preserving is owned by his friend, who decided to turn it into a tourist attraction for residents wishing to visit old homes, in addition to the possibility of turning it into a media production site where movie and drama makers can film scenes depicting ancient life.

“The residents of Gaza live under blockade and cannot travel and visit archaeological sites that they watch on TV. Therefore, we seek to revive the ancient houses in order to allow them to visit them and learn more about the old life here,” al-Ghoul said as he painted a portrait of a famous Arab singer on one of the inner house walls.

“Life here is not so bad if we look at the beauty side of our city, its heritage and its history, we just need to show its true face,” al-Ghoul said as he put the final touches on a mural of famous Lebanese singer Fayrouz.

The initiative of al-Ghoul and his friend was not the only one in Gaza. Some Palestinian businesspersons launched an individual effort to restore and revive old houses dating back to the Mamluk, Ottoman and British eras.

Jawdat al-Khoudary, a well-known businessperson in Gaza, bought many old houses in order to restore them and transform them into museums and tourist attractions for the residents of Gaza.

We are trying to save Gaza’s heritage, which has always been a passageway for world merchants, as well as kings and Caesars throughout history,” al-Khoudary told Xinhua, adding “it is necessary not to demolish ancient homes because of urban expansion.”

According to al-Khoudary, the restoration of old houses is not an easy job, as it “takes months or years at times, especially if basic parts of those houses are destroyed or lost.”

He added that preserving the Palestinian heritage is not the government’s mission only, noting that every individual is required to protect his heritage and historical identity.

The population of the Gaza Strip has witnessed a notable increase in recent years, pushing people to build on agricultural lands or remove old houses and build bigger higher ones.

According to the estimates of archeology and restoration experts, there are about 100 ancient houses in the Gaza Strip dating back to the British, Ottoman and Mamluk eras, as well as Byzantine times.

Suleiman Hashem, an archaeologist from the Gaza Strip, said the restoration of ancient houses needs vast amounts of money, stressing that specific and specialized bodies must adopt conservation works.

Meanwhile, Jamal Abu Raida, director of the General Department of Antiquities at the Hamas-run Ministry of Tourism and Antiquities, said that the ministry is trying to protect old homes from demolition. Still, he complained about the limited financial support necessary for preserving these homes.

“There are individual efforts from businessmen and the owners of these houses to restore them in order to turn them into tourist attractions or investment projects, but that is not enough to save Gaza’s heritage and these initiatives remain modest,” Abu Raida told Xinhua.

Abu Raida explained that the Israeli blockade and the frequent military confrontations between Israel and Palestinian armed factions in Gaza have negatively affected the efforts to protect and restore these monuments. Enditem