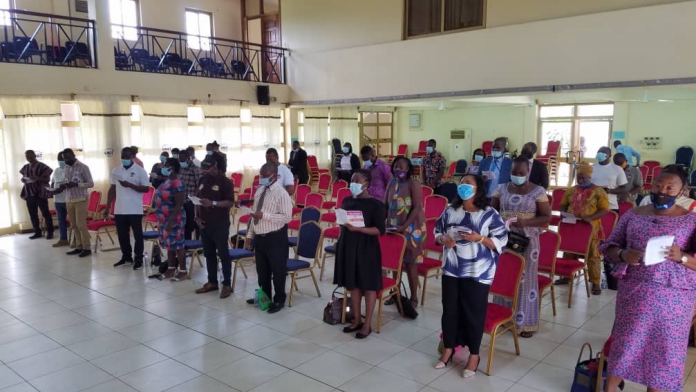 Mr. Morgan Ayawine, Acting General Secretary of the Industrial and Commercial Workers Union (ICU) is calling for more collaboration between workers and employers towards sustaining productivity within the COVID-19 pandemic.

He said the coronavirus remained an unexpected challenge whose reverberations continued to rock the industrial sector, and that unions of both workers and employers must strengthen partnership to be able to survive a “common enemy”.

The Secretary General made the call at the 2021 Volta Regional Delegates Conference of the Union in Ho.

“It’s time to put our assets together to create and share. It is time to consider the “we” principle. Employers and the Union must do things in common.

“We need each other more than before. The ultimate goal is to collectively contribute our quota to socio economic development, and we can do our bit by conscientizing our members to appreciate workers’ role, and we expect the Ghana Employers Association to also play their role” he said.

Mr. Ayawine asked that union-employee relationships were guarded against “misunderstandings, and unfair treatment” which eventually affected productivity, and thus appealed to workers and employers to remain faithful to the laws governing labour.

“I therefore advise all workers and employers to be guided always by the dictates of the Collective Agreement and the Labour Law, which are our bibles, and to do the right thing at all times so that either party would be justified in the end,” he said.

The General Secretary appealed to sector workers to join the Union and commit to familiarizing with the labour laws, so as to protect their employment assets.

He also appealed to the Government and other stakeholders to place priority on matters of concern to the Union in order to prevent industrial strife.

“In these difficult times in which we find ourselves as a country, every effort must be made by the government, employers and labour to address labour-related concerns speedily in order to forestall unnecessary industrial actions at workplaces.

“Productivity suffers when there is no peace and harmony within the arena of labour relations,” Mr Ayawine said.

The conference was capped with the election and swearing in of new regional executives for the Union.