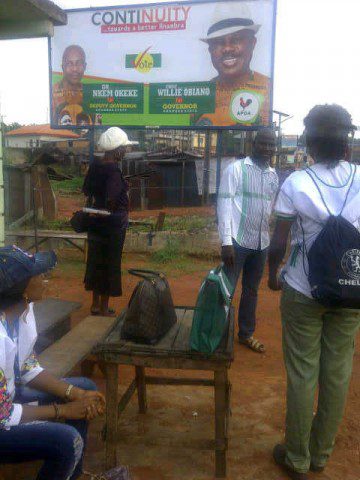 Machines of the Independent National Electoral Commission, INEC, provided for the ongoing Voters? registration exercise have failed to perform in Enugu State.

The Nkanu West council chairman, Mr. Afam Nnaji, was seen distributing some computer support materials to help see if the machines could be used to register his people.

Residents who came out to register were enraged as the INEC machines deployed for the exercise wobbled in most of the centres.

In most of the registration centres in the state, the people who came out in their large numbers were seen waiting patiently as INEC officials and some LG council workers battled to fix the machines.

Most of the machines had battery, cord or thumbprinting problems, making the ad-hoc INEC staff manning them to frequently shot down which made the process to be slow.

At Ogonoeji Apugo primary school in Nkanu West, where most people were deregistered, only 40 people were registered as at about 2pmwhen our correspondent visited the unit while people waited.

Nkanu West Council chairman, Afam Okereke, said he wants INEC to extend the five days duration for the registration and should make haste to resolve the problems so as not to disenfranchise the people in 2015 elections.

At Ward 11 situated in Okpara Square, Independence layout in Enugu metropolis, over 400 people were seen sitting at the pavilion angry that the registration was going on a snail?s speed.

The INEC ad-hoc staff at the centre, Mr. Noah Nongo, said they could only register 39 persons on Wednesday when the exercise began as their machine had low battery problem.

He also said that they were slow yesterday as the crowd who came out were becoming restless, making them to register only 21 persons as at 11:15a.m.

A councillor in Enugu North Local Government Area, Hon. Catherine Ayogu said that over 1,000 persons came out on Wednesday to register, but there was only one machine.