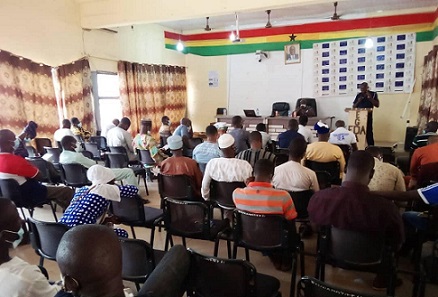 The East Gonja Municipal Directorate of the National Commission for Civic Education (NCCE) has engaged influential youth leaders among other stakeholders in the area on preventing violent extremism in the municipality.

The day’s event, held at Salaga, formed part of the Preventing Electoral Violence and Providing Security to the Northern Border Regions of Ghana project funded by the European Union to among others counter violent extremism in the country.

Mr Sato said issues of security were the responsibility of every citizen urging community members to be alert and report suspicious characters to the Police for necessary actions to be taken against them.
He advised the participants especially the youth not to fall prey to activities of violent extremists.

Chief Superintendent Yelisong, Salaga Divisional Police Commander, took participants through the Public Order Act and other violent extremist related security issues cautioning the youth to desist from acts that would cause insecurity in the municipality.

Reverend Fr Nerius Dong-Yeru of the Catholic Church at Salaga, took the participants through peacebuilding mechanisms and coexistence advising the youth to tolerate one another and respect each opinion to promote peace.