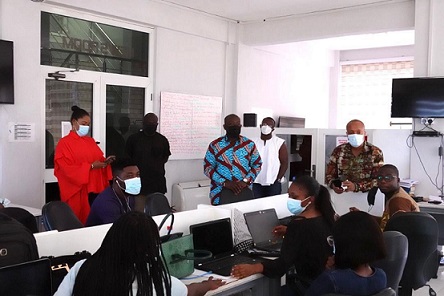 The Information Minister, Mr Kojo Oppong Nkrumah, Friday visited Citi FM to commiserate with the two journalists allegedly to have been assaulted by National Security operatives.

He assured the journalists: Caleb Kudah and Zoe Abu-Baidoo, that further investigations would be conducted into the matter.

“As a colleague and as a Minister of the sector, I came here this morning to pay you a visit and also express to you the worry with which we received the account on what transpired at the National Security,” he said.

“We were worried because it does not reflect how staff of a security agency should treat anybody, be the person a citizen, let alone a journalist.”

“If that person is under investigation, assisting an investigation or being suspected as having done something untoward like this case, the suspicion of going contrary to the rules ….will not warrant that particular conduct as reported,” Mr Oppong Nkrumah said.

They subsequently picked up Zoe Abu-Baidoo on the premises of Citi FM to assist in investigations for receiving the footage from Mr Kudah on her phone.

The two journalists were released after interrogation that same day.

Addressing management of the Accra-based radio station, Mr Oppong Nkrumah called for patience on the matter and assured of further investigations.

He urged the Management to take advantage of the office of the Coordinated Mechanism for the Safety of Journalists for independent investigations into the matter and for legal redress.

Management of Citi FM expressed appreciation to the Minister for the show of support.