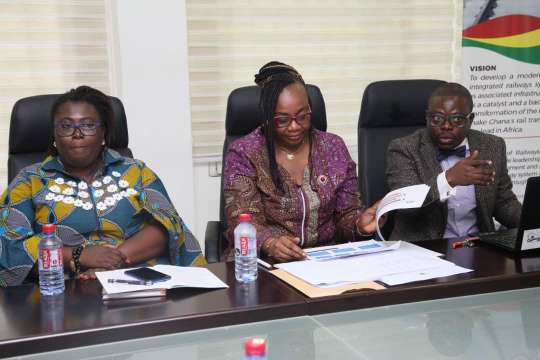 The Ministry of Information (MoI) has begun sensitisation exercises on the Right to Information Act (RTI) for the management and staff of the various Ministries, Departments and Agencies (MDAs), as part of the implementation of the RTI (Act 989).

The sensitisation exercise, which began on Monday, February 24, is expected to continue for the next 16 days and would highlight key areas of the RTI to ensure its effective implementation.

At a sensitisation workshop for workers of the Ministry of Railways Development in Accra, Mr Mawuli Segbefia, a Principal Value Officer at the Policy Planning, Monitoring and Evaluation Directorate at the Ministry, said the RTI law was very important because it would help build a culture of transparency and accountability in public affairs.

He said the law was revolutionary since it would change the way information was generated, stored and diffused in the public service and ensure that no one is denied access to information.

Mr Segbefia, providing an overview of the legal framework of the Act, said there is the need for clear times lines for response to a request and proactive disclosure of information.

He said the application form would be received and the applicant notified within 14 working days after submission on the availability or existence of the information requested.

In situations where the information exists, he said, the applicant would be notified of the manner and data in which access may be granted between one and 120 days upon notification on the existence of information and the prescribed fee for the reproduction of the information requested.

Mr Segbefia said offences under Act 989 included: failure or neglect by an information officer or other public officers to perform his/her function under the law, obtaining personal information of third party under false pretense and willfully providing false statement in order to obtain information.

He said people found to have violated the law would attract either a summary conviction of a fine between 250-500 penalty units; a prison term between one to three years; or both.

More so, information affecting international relations and information that affects the security of the state.

Mr Segbefia said although the implementation of the RTI law had started there was some work to be done including the setting up of the RTI Commission for appeals, establishment of information units at the various MDA’s headed by a fully trained RTI Officer; and nationwide deployment of Information Technology based solutions for the archiving and retrieval of information.

He urged the MoI in the interim, to designate an RTI officer and ensure that the front desk and designated RTI officials are briefed on the handing of request for information and make available application forms for requesting information.

Again, the Ministry should release the designated RTI officer and the Chief Records Officers for training which is expected to start from March 11.

Mrs Patricia Dovi Sampson, the Director of the PPME of the Ministry, noted that information exempted from disclosure should it be disclosed, would undermine the deliberating process.

She mentioned those exemptions as information that could contravene parliamentary privileges, prejudice the fair trial of a person and infringe privileged information.

She encouraged the workers, including the drivers and security and guards to be aware of the RTI law and help in the implementation of the law by directing all visitors who enquire about the RTI to the appropriate office.

Ms Ama Frimpong, a member of the sensitisation team, said applicants who feel they have been wrongly denied access to information could appeal to the RTI Commission, an external body mandated to promote, protect and enforce the RTI.

In addition, the applicant can appeal to the high court if he or she is not satisfied with the decision of the Commission.