Majority Leader Osei Kyei-Mensah-Bonsu has described as an exercise in futility, an application filed by three members of the Minority Caucus of Parliament by which they are seeking an interlocutory injunction on the 1 May 2022 intended implementation of the e-levy recently passed into law and signed by President Nana Akufo-Addo.

The Minority Caucus recently petitioned the Supreme Court for an order of interlocutory injunction to restrain the Akufo-Addo-led government through the Ghana Revenue Authority (GRA) from commencing with the implementation of the Electronic Transfer Levy (E-Levy) as scheduled. 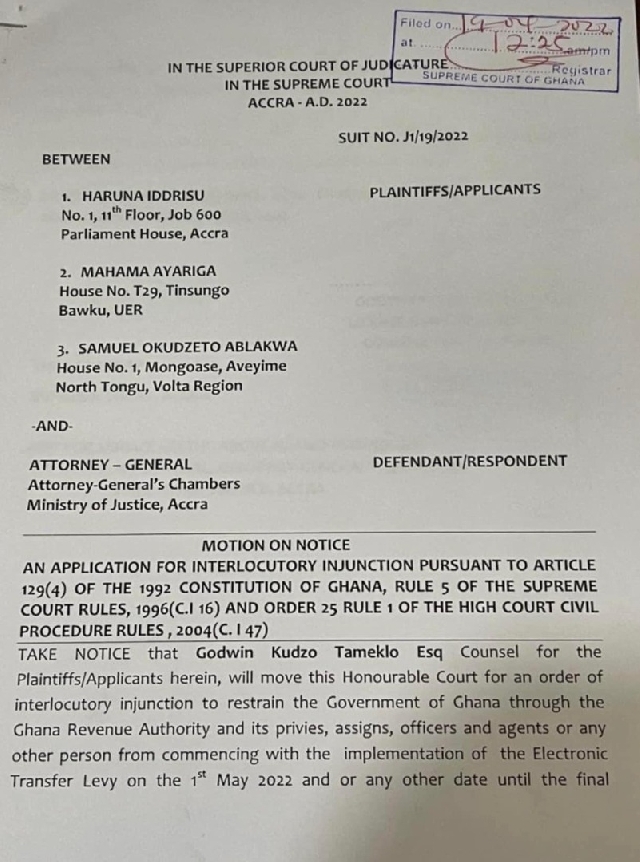 The three filed an earlier suit at the apex court challenging the passage of the e-levy bill by a one-sided parliament.

They claim the number of legislators in the chamber as of the time the bill was passed did not form a quorum as declared by the Supreme Court.

The opposition MPs want the Supreme Court to set aside the passage of the e-levy bill by the 136 MPs of the Majority Caucus present in the chamber of parliament on 29 March 2022 by declaring it as unconstitutional, null and void.

The new writ seeks to stop the commencement of the levy until a final determination of the first case.

Addressing the media on Friday, 22 April 2022 on the Minority Caucus’ petition, the Majority Leader said: “We’ve been told that they have filed an injunction; the Minority has taken the matter to the Supreme Court for the court to rule on the supposed unconstitutionality on the vote that was taken on the e-levy”.

“I will just say that the burden of proof lies with the Minority to go to court and prove their case”, he noted.

“So, if the representation of the House has taken a decision, they can come with a motion on the decision. Why don’t they want to do that?” he wondered, adding: “But as I said, the burden of proof is on them”.

“Now, finally on the injunction, I don’t want to pronounce anything but I guess you and I know that it is an exercise in futility,” he added.