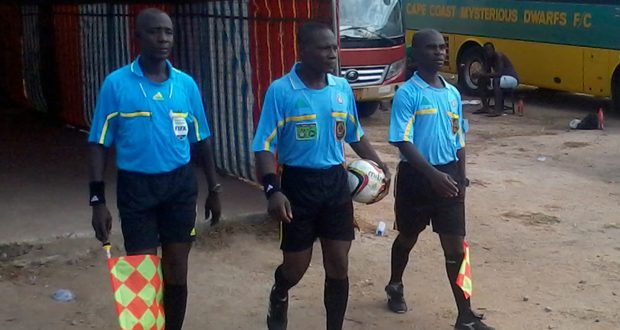 The Ghana Football Association (GFA) has fully demonstrated that the opening matches of the 2015/16 Premier League season will be played at all the league centres by naming match officials minutes after widespread reports of an injunction preventing the start of the competition.

Doubts surrounding the commencement of the Ghanaian top-flight started on Thursday following a court injunction order by a football fan federation insiders said they have received no such order from the court.

As such the GFA will go ahead with matches to be played across the eight league centres and named the referees and other match officials for the game.

In a Twitter posting the GFA announced that the matches will be played – a move clearly meant to assure football fans and clubs that the game will go ahead.

The 2015/16 Ghana Premier League will kick off this weekend in all eight match venues across the country. pic.twitter.com/sYH1z3N1ZG

Desperate last-minute measures are underway to prevent the much-awaited Ghana Premier League from going ahead as a well known Tema Youth supporter Babia Alhassan went to court on Thursday to prevent the competition from kicking off.

Alhassan claims he has served an injunction writ at the Ghana FA, to stop the federation from going ahead with their Premier League but the country’s governing body’s insiders say no such order was received.

He says he wants to prevent the start of the Ghana Premier League because Real Athletico were relegated to from the First Division to the Second Division. The Tema-based club say they have not asked him to slap an injunction on the league.

Alhassan’s action has also been disowned by his own Tema Youth who also claim they have not part in his action thus it appears he is not taking the action as an official of any club.

In what looks as like direct response to the widespread reports, the GFA has named matches officials for the game strongly indicating that Saturday’s big kickoff between giants Asante Kotoko and WAFA will come off as planned with highly-rated referee William Agbovi taking charge of the game.

The Ghana FA has been tight-lipped and gone ahead to name officials.

For more news on the Ghana Premier League, please visit our dedicated exclusively for news from the local league via the navigational tab at the top of our pages or click here.

Below are the match officials for Match day 1 of the 2015/16 Premier League: