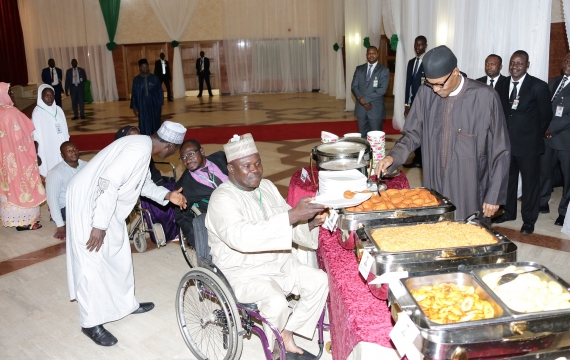 An African adage says, “Uneasy lies the head that wears the crown.” Whether in Africa, Europe or Asian continents, leaders are burdened. And support of his family has to come with full measure for him to succeed.

Leaders of nations battle to contain disparate interests; strive to leave a legacy and unquestionably accept responsibility for acts of commission or omission from subordinates. A leader of any nation spends more time cogitating and less for leisure. He deprives himself and his family the comfort of his presence most of the times. It’s worse when a leader operates in a clime where there is stiff opposition.

In faraway Germany, Nigeria’s President Muhammadu Buhari decried the burden posed by a multi-coloured opposition in Nigeria in these words; “It’s not easy to satisfy the whole Nigerian opposition parties or to participate in the government.”

A leader in the words of the ancient Greek Philosopher,Aristotle must be a philosopher King,who must claim superior knowledge over the rest of the ruled, opposition inclusive. He must not only imbibe the virtues of truth,honesty and hard work, but ardently exhibit it at all times in private and public arenas. President Buhari is an embodiment of these virtues,which is the source of his courageous and fearless war on corruption in Nigeria.

The family of a Leader, whether designated as President, Prime Minister or Chancellor or as in the case of Germany is rightly,the first family of the nation. They must exude the quintessence of uprightness and puritanism.

When they pander to debauchery,the nation screams and shrieks; hurl invective at them. Like any other couple, leaders of nations also double as leaders of their families. And the shame of ridicule of a failed first family imposes a heavy and additional burden on the husband and wife to keep an eagle eye on the family.

The temptation of children of leaders of nations to pander to waywardness is extremely high because of the feeling of a paradise on earth. It is fired by the blaze of affluence.

Therefore,President Buhari’s epochal statement that “I don’t know which party my wife belongs to; but she belongs to my kitchen, my living room and the other room,” is humorous; but also pregnant with meaning.

The President was reacting to comments credited to his wife, Hajiya Aisha Buhari in a BBC interview,which had political undertones. Invariably,President Buhari as leader of Nigeria and also head of Nigeria’s first family sought to limit the duties of his wife, to domestic affairs only, which in itself is a herculean burden.

Nevertheless,the statement is the embodiment of the hard truth about the onerous task on the shoulders of the wife of the President in ensuring the proper upbringing of the first family and proper care of the home-front.

It is a sacred duty she owes to the nation. The Holy books prescribed it. It is the unwritten norm in traditions of almost all communities in the world. Families which slide into immorality, resent hard work and embrace odiousness are not only shunned, but loathed.

In Nigeria,with its complexities and a fastidious people,the imperative of an ideal first family is a ministry of its own headed by the wife of the President. And she needs not be burdened any further with the exigencies of politicking.

It is confirmable that women married to high profile politicians are the epitomes of endurance and patience. They spend days or sometimes weeks, without the comfort of their spouse,who keeps moving from one meeting in one location to another.

And since Buhari’s foray into partisan politics, Aisha was automatically elevated from the position of housewife to the lofty status of the Minister of Kitchen and Domestic Affairs. She has lived with the task all her marital life,by ensuring the children, especially the tender ones are properly brought up,in the periods of her husband’s absence for political adventures. Her ministry of Kitchen and Domestic Affairs ensured the children were properly fed, attended school timely, cultivated good social relationships and never deviated from the path of morality.

Now,after exhaustive political meetings,only Aisha knows the delicacy that would revive and energize her husband. It is perhaps,the secret of President Buhari’s strength and agility at his octogenarian age. It is the signpost of excellence from Aisha’s Kitchen and Domestic Affairs ministry.

She cooks endlessly for the teeming supporters or visitors to the house and now Aso Villa,where President Buhari is resident. She plans the President’s menu and outlines what goes for breakfast,lunch and dinner as well as refreshments’.

Aisha is the closest confidant of the President and he confides in her, issues that would ordinarily not be thrown to public purview. Even though President Buhari is endowed with superior knowledge over the wisdom of his wife, but undoubtedly,the shared thoughts give him inspiration to courageously and fearlessly confront the devouring external forces against him.

A troubled house unsettles the head of the family.It inflicts a psychological burden on the leader of the house, which affects him in multiple dimensions. But by ensuring peace in the house,Aisha raises a platform that gives Buhari the confidence to face Nigeria to deliver on his mandate of leadership to the country.

But by far, the most alluring and enduring accomplishments of Aisha’s ministry is her supportive role in ensuring discipline is inculcated in the children of the first family. They exemplify the virtues of truthfulness, discipline, hard work and honesty. In 1983 when Buhari was military Head of State and since his return as civilian President in 2015, none of his children has been caught in public cynosure of haughtiness and waywardness, traits common with children of leaders of President Buhari’s status.

It will therefore, not be out of place to nominate Hajiya Aisha Buhari as the best performing Minister of Kitchen and Domestic Affairs in Nigeria for the year 2016, as Nigerians look forward to 2017 with more brightened performance of the first family . So, dragging her into politicking would be a distraction designed to diminish this enviable record.