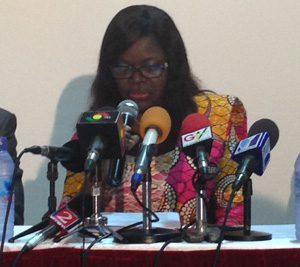 Government Statistician, Philomena Nyarko addresses the crowd as she launches the IBES

With the vision of collecting the establishment-level information necessary for Ghana?s development, the IBES will create and maintain a primary database for statistics and information within all sectors of the Ghanaian economy.

Philomena Nyarko, Government Statistician, who officially launched the IBES on Tuesday in Accra at a short but colorful held at the Ghana College of Physicians and Surgeons, explained the unprecedented size of the project.

?The GSS has conducted economic surveys of similar magnitude in the past. An example of such surveys is the Industrial Census. The difference between what has been done before and the IBES is the scope,? Nyarko said.

According to Nyarko, the IBES will be conducted in two phases.

Under the first phase, which was the primary focus of the ceremony, all business establishments would be registered.

These non-household establishments include all units of production that can be traced to a fixed physical location; stores, shops, whether in a complete structure or not, houses of worship, public sector institutions, agricultural institutions, schools, health facilities, businesses with signage, and stalls in any given market place that operate permanently (5-6 days a week).

?The objective of the first phase of IBES is to obtain critical data on business establishments as a basis for effective policy-making and implementation for government and sound analyses and decision-making for businesses,? Nyarko said.

Information gathering for the first phase of the IBES will take place in September.

The ceremony also saw the inauguration of the three IBES Committees.

The second phase of the IBES, which focuses on collecting more detailed information on a sample of the identified establishments, will commence in January 2015.