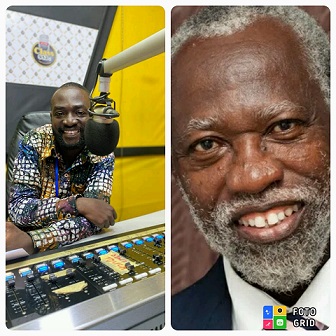 One of the achievements a media producer could be proud of is the relationship he’s been able to establish with his resources persons.

Nii Marmah Boye, a producer of Class FM is proud to have that achievement in his line of work.

According to Professor Stephen Addai, “It’s been a pleasure knowing Nii Marmah Boye for the past six years, I like his level of intelligence, drive, zeal, and willingness to improve himself and I think he has a colossal future; I love the opportunity to know young journalist like you who’s aspiring to be greater.”

I practically describe passion as a situation where no matter the weight or value of the reward, you still work till you archive your goal. My love for media commenced when I completed senior high school and looking for a place to practically learn on the job.

During that year, a new frequency modulation (FM) station called Starr FM was launched with a number of the known media practitioners working there. Seeing that, I developed an interest in working with Starr FM. Normally I was less occupied on weekdays due to my school schedule. I attend school on weekends only. During weekdays, I would listen to the station from morning till I retire to bed.

I discussed my intention about the media with Baby as he’s affectionately called (one of my friends in my area) who’s also a senior to me in the media. He encouraged me to take a bold step to Starr FM and discuss my intention with whoever I meet there; obediently I did that. When I got there, I meet Naa Ashorkor (I won’t forget about that day and her friendly reception without knowing me from anywhere), she assisted me to the right authority to engage. In the process, I met Sedem Ofori, who served as the programs manager at Starr FM.

After a long process that took almost a month just to get an opportunity to practically learn on the job, Sedem Ofori got a better offer to work with Class 91.3FM. I had no choice but to follow him; I did exactly so. At Class FM, I was accepted as an intern for almost a year before I was placed on an allowance (appreciation goes to Benjamin Akakpo and Roderick who’s now in the United Kingdom) which after a long process segued full-time employment.

At my early stay at Class FM, Sedem Ofori (a captain in Ghana’s media) had to move on to Media General and he asked my head of production by the name Robert Israel to tutor and mentor me. I must say Robert is one of the best unsung media practitioners in Ghana. Robert gave his all out and made sure I become one of the best media producers in Ghana, I must say by God’s grace we are on it; we’ve come far!

Through the hard and sacrificial process, I segued from an intern to a producer on Class FM’s morning and then to one of the lead producers at Class FM.

In all of these, I have managed to establish contacts and networks locally and internationally with a lot of lessons and experiences gathered in the course of my work. I have never regretted finding myself in the media.

GIMPA to train queen mothers in leadership and governance

GIMPA to undertake research on One Village, One Dam