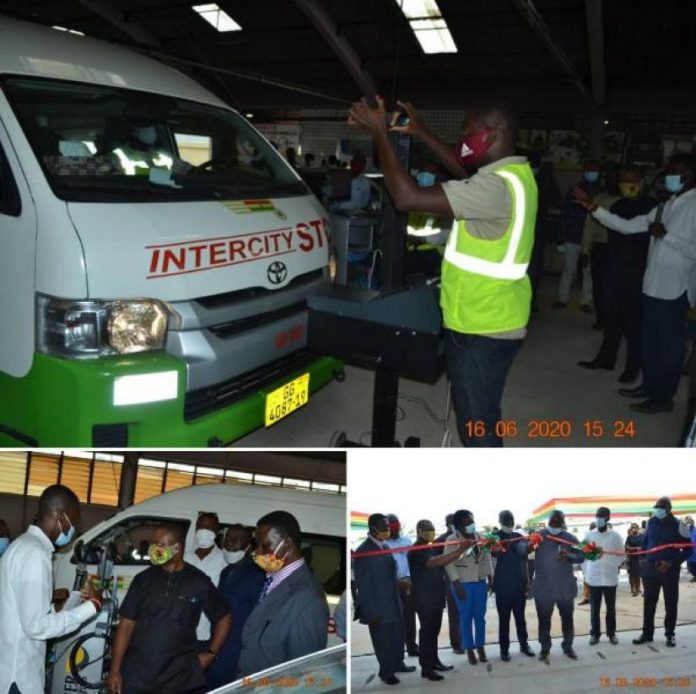 The Inter-City STC in partnership with Hammer Automobile and Transport Company has unveiled a State-of-the-art Vehicle Testing Centre at the STC yard in Accra.

The Centre, which is intended to serve the Kwame Nkrumah Circle-Kaneshie, North Industrial Area, Accra Central and the Graphic Road catchment area is for the Visual and automated testing of vehicles to see if they are road worthy and would be under the supervision of the Driver and Vehicle Licensing Authority (DVLA).

Nana Akomea, Managing Director of Inter-City STC said there was a lot of investment made into the facility and that there were no excuses for buses and trucks to escape from testing their vehicles as the facility could check their road worthy liabilities.

He admonished the Motor Traffic and Transport Department of the Ghana Police Service to be vigilant in inspecting the road worthiness of vehicles.

Nana Kwaku Oppong -Amoah, Managing Director of Hammer Automobile said, Government through the Ministries of Transport and Roads and Highways is burnt at reducing road crashes on roads to protect the loss of lives and property.

He said Government also promised creating an enabling environment for the Private Sector to thrive through Public-Private Partnership (PPP).

“What we are witnessing today is as a result of the PPP, which impact is to reduce unemployment and also create opportunity for other business”.

Mr Prince, Adusei, a Deputy Chief Executive Officer of the DVLA said, since Legislative Instrument 2010 was passed in 2012, the Authority had a number of Private Vehicle Testing Stations, “this we commissioning today is the 26th one with four more on the way.

“We also have over 50 applications pending, but we are not rushing into accrediting them. Also the Accra Digital Centre will soon be accredited to give out Driving Licenses”.

Mr Samuel Oppng, the Board Chairman of Inter-City STC called on motorist to regularly test and repair their cars if they were faulty for their own safety, adding that, accidents were only cause by bad cars and bad drivers and not bad roads.

“This facility can accommodate 20 buses at a go and bus owners have no excuse again for not checking the road worthiness of their vehicles”.

Mr Samuel Nuamah Donkor, immediate past Managing Director of the Inter-City STC commended his successor for continuing the project he initiated, adding, and “It is not easy to see people continuing with projects they have inherited for obvious reasons”.