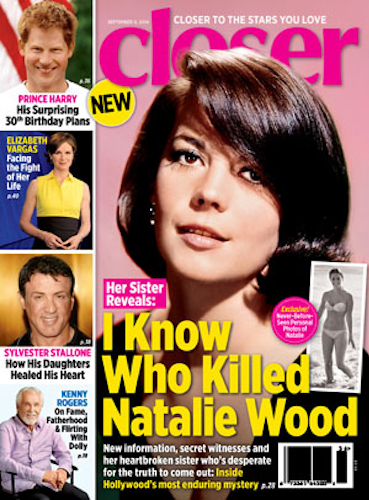 It’s been 33 years since Hollywood?s biggest unsolved mystery took place, but interest in Natalie Wood?s death has never waned ? in fact, the case was reopened in 2011. Now, Natalie?s sister Lana reveals a major bombshell to?Closer Weekly?– that the truth behind her sibling?s death may soon come to light.

?I know who killed Natalie,? the screen legend?s sister insists in her exclusive interview with?Closer. And although Lana cannot disclose details, she reveals that ?according to the detectives, they think they do, too. There is no way they could [shut down] a case this close to being solved.?

And while new information gives promise to the truth coming out, Lana shares that she is reminded of the tragedy almost daily. ?I don?t believe there is such a thing as closure. Because I?m her relative, I have to hear so many details about the new information, and there are some things I just cannot tell anyone. Her death is ugly and painful to this day. It always will be,? Lana sadly tells?Closer. ?These days, I only go to the cemetery once a year because it hurts too badly.?

For more details inside this Hollywood mystery including new information from Lt. John Corina who?s been heading the case for two years, pick up the new issue of?Closer Weekly,?on stands now!