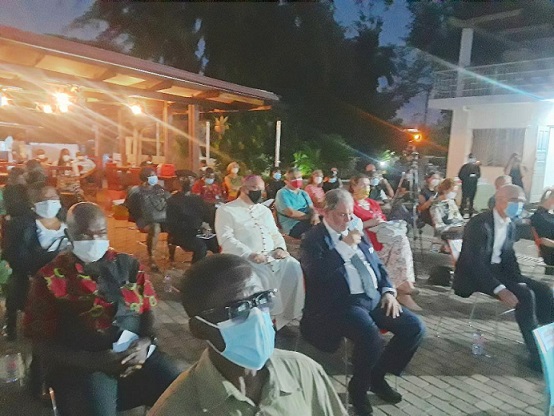 The Embassy of the State of Israel in collaboration with the Embassy of the Federal Republic of Germany and the UN in Ghana have commemorated the 2021 International Holocaust Remembrance day in Accra.

It is to rally all people to end racism, antisemitism and discrimination of all forms.

The 2021 International Holocaust Remembrance day, was held on the theme: “Facing the Aftermath: Recovery and Reconstitution after the Holocaust”, to honour the memory of the six million Jews who perished in the Holocaust during the period of World War II.

This year’s commemoration focuses on the measures taken by a multitude of players in the aftermath of the Holocaust to begin the process of recovery and reconstitution of individuals, communities and systems of justice.

It also encouraged discussions on how measures taken in the past could contribute in the context of rebuilding societies damaged by atrocity crimes, crimes against humanity, war and the ravages of disease.

At the Accra commemoration of the Holocaust, Mr Charles Abani, UN Resident Coordinator, urged nations to reassert their commitment to human rights, collectively stand up against racism, discrimination and violence.

“Most importantly, we must also go beyond remembrance, and make sure that new generations commit and take tangible actions to respect and value human rights and abhor racism, discrimination and hate speech.

“We must continue in these footsteps to ensure the generations after us are well informed and prepared to protect their generations from these negative acts. “

Mr Christoph Retzlaff, the German Ambassador, said the most important lesson to be learnt from the Holocaust was the statement, “Never again,” adding, that message had become a fundamental tenet for Germany.

“Our commitment is firmly rooted in our awareness of the importance of freedom and the rule of law, pluralism and tolerance,” explaining that “those values required peoples constant vigilance and committed effort through exposing old and new prejudices and stereotypes for what they are”.

Mr Retzlaff emphasised that it was only when human dignity was respected and solidarity upheld that “our world will flourish in peace”.

Ms Shani Cooper, the Ambassador of the State of Israel, used the occasion to narrate the chilling experience of her then six-year old grandmother who lived in Brussels when the Nazis invaded the town, and her later ordeal, just because she was a Jew, and had to forget about her Jewish origin and become a Christian before she was able to escape the “murderous Nazis.”

She said amid all the Holocaust experience, “there was today, the remains of racism, antisemitism and discrimination still blooming,” saying that “we have to change.”

She called on countries to begin the fight against those negative acts from within, and urged Ghana, to join the International Holocaust Remembrance Alliance and adopt its definition of anti-Semitism, as well as do well to make the celebration of the commemoration of the Holocaust a national event.

Mr Joseph Whittal, a Commissioner of the Commission for Human Rights and Administrative Justice (CHRAJ), in a panel discussion, said Ghana could learn lessons from the Remembrance Day, and endeavour to do away with negative attitudes towards women and girls, which were based on outmoded culture.

He also mentioned that persons living with HIV, disability and all forms of discrimination against other vulnerable groups must be dealt with.

Ms Betty Eppel, a Holocaust Survivor, who is now based in Israel, shared her experience of the event via zoom, and said the ordeal made her childhood life miserable, making her to live in misery and fear, until she met her husband, later in life.

“We should all make a difference by loving one another”, Ms Eppel advised. The word Holocaust, with a Greek roots means “sacrifice by fire” and that refereed to a state -sponsored systemic murder of the Jewish population of Europe and Northern Africa during World War II, at the hand of the Nazi Government led by Adolf Hitler.

Alongside the Jews, a myriad of other groups considered undesirable or dangerous, including; the mentally and physically handicapped, the deaf, homosexuals, Roma or Gypsies, political dissidents or intellectuals and many more were all murdered by the Nazis.

The UN General Assembly in 2005 designated January 27 as an annual International Holocaust Remembrance Day in memory of the victims of the Holocaust.