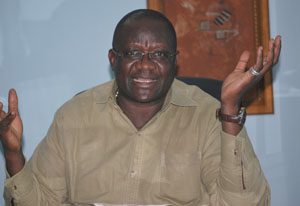 Aspiring chairman for the New Patriotic Party (NPP), Paul Afoko, yesterday came out to defend the decision of the party?s Vetting Committee to clear him to contest the upcoming chairmanship race of the party.

?I?m sure you?ve all heard the news by now that there are no more impediments on my way. The Vetting Committee has done its job and based on its investigations, I have been cleared,? he told journalists whilst insisting on his innocence regarding drug-related allegations against him.

This, according to him, caused him and his family a great deal of stress.

He said, ?I would want to state emphatically that the report from the British authorities as I was told by the Vetting Committee, is very unequivocal that ?Paul Afoko is not known to the British police,?? a claim which has since been denied by Martin Adjei-Mensah Korsah, Chairman of the Committee.

According to Martin, the Vetting Committee decided to clear Mr. Afoko because ?time is of the essence and not based on any such report as suggested?, he told DAILY GUIDE.

Mr. Afoko said he did not have any doubt whatsoever that he would be cleared of the allegations made against him since in his own words, ?I knew that I?d never been to prison and I?ve always maintained that the only prison I have been to was when I was arrested in my house by soldiers and carried straight into a prison for political reasons.?

The NPP man said, ?I believe in building bridges for the future, not for the past; I will use the past as a guide but the bridges that I will build are always bridges that lead to the future because the future is what is coming.?

He therefore called for unity in the NPP since according to him, ?We have to unite for purpose; and that purpose is power?, noting with emphasis, ?We have no other purpose, the only reason why we come together as a political party is for power.?