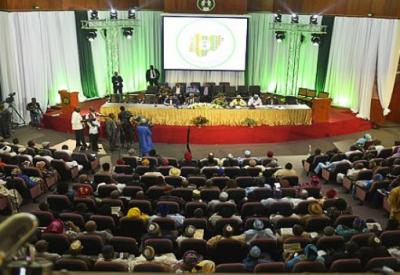 The South-West delegation to the ongoing National Conference has rejected the report of the Consensus Group of the conference on the derivation principle and others presented by Prof. Ibrahim Gambari at plenary yesterday.

The delegation in a statement signed by its secretary, Dr. Kunle Olajide yesterday evening, said it took the decision after its caucus meeting, adding that the report gave a wrong impression of what the intervention funds recommended for the North were actually meant to achieve.

?The Yoruba delegates, arising from the caucus meeting, rejected the report stating that the report gave a wrong impression of what the intervention fund was set to achieve. The fund is aimed to serve the collective interest of the country and not a sectional interest as presented by Pro. Gambari.

?South-West delegates, however, view Gambari?s projection to amount to depletion of the federation account through nebulous funds to promote insurgency in the country. It also aimed at legalising the impoverishment of non-oil bearing states in South-West, South-East and South-South. As these states neither benefit from derivation nor the so-called intervention fund,? the statement said.

Earlier after the adjournment of the day?s sitting, some members of the group were seen telling Gambari that his presentation was not the true reflection of what transpired at their meetings.

Also, some South-South delegates were seen surrounding their leader and elder statesman, Chief Edwin Clark over the turn of events.

Meanwhile, delegates may be set for showdown when they reconvene this morning over the voting that will take place on the contentious recommendations of the Committee on Devolution of Power.