The representatives of a number of international press organizations have come together in a meeting in Istanbul, and urged the Turkish government to release the jailed journalists.

The Turkish Journalists’ Association (TGC), the International Press Institute (IPI), Article 19, Swedish PEN, the Reporters Without Borders (RSF), and the Association of European Journalists (AEJ), joined the meeting, as well as a number of journalists.

The international press bodies have urged Turkish government to release the jailed journalists “without condition.”

TGC head, Turgay Olcayto, stated that journalists have been struggling since the foundation of the Turkish Republic, but “there was not any distressful era like this one.” 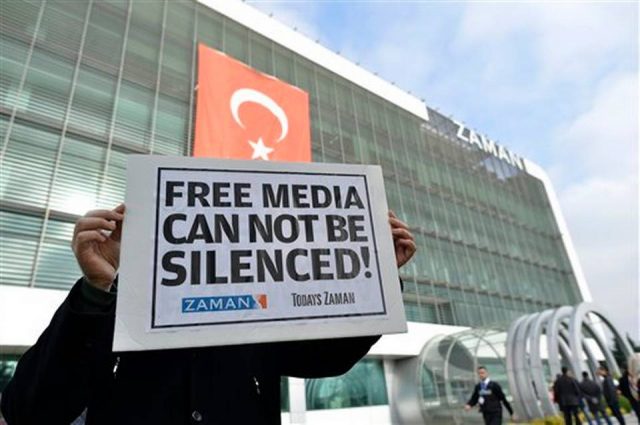 “Among imprisoned journalists, there are those who have only engaged in journalistic activities. We want to visit them as an association. However we have been never allowed to visit any of our friends so far,” Olcayto said.

“Journalists and media outlets are under massive pressure and the people do not have the right to access information. Despite this fact, the journalists continue to do their best even though they become unemployed. We are not losing our hope,” he said.

IPI’s coordinator for advocacy and communication activities, Steven Ellis, said in the meeting that they have participated in the meeting “as the press organizations that are concerned about the future of freedom of expression in Turkey.” 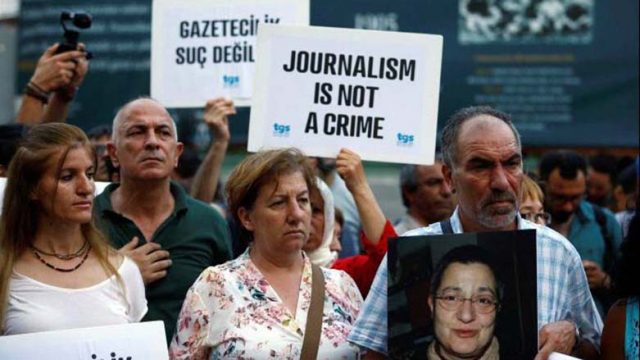 “The journalists are kept in jail in a completely unlawful way. It’s an unacceptable situation for a country that is expected to respect democratic processes. Bringing media freedom under pressure will not be limited to that profession only. Those who don’t respect human rights and democratic values cannot be partners that you can jointly act,” he said.

Sandy Bremmer from IPI also noted that “it’s unacceptable for Turkish government to bring the society and the journalists under pressure.”

Bremmer stated that “No journalists can be subjected to illegitimate treatment because of the work they do. The duty that awaits the international society is to react.

It’s their duty to stand against unlawful treatment. We are here to bring light to the prices the journalists pay. Those in jail only ask for one thing; they want journalism to be carried out freely.”

Article 19’s Georgia Nash, stated that “The charges which are far from solid evidence harm the trustworthiness of the judiciary.

According to the government, the journalists are terrorists, but they only show their articles as evidence. We demand the release of journalists without any conditions.”

Also speaking at the event, AEJ head, Otmar Lahodynsky, said that “Europe has been silent on the events that are unfolding in Turkey,” adding that the arrest of Germany’s Die Welt’s correspondent, Deniz Yücel, is a move to “tease international journalists.” 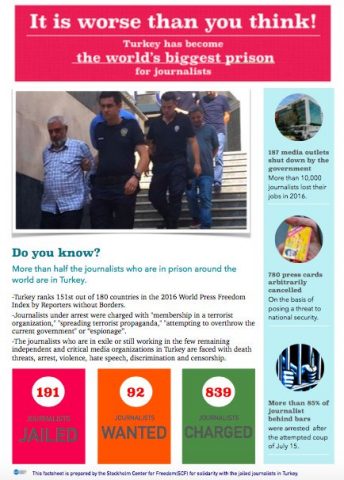 According to a report released by Stockholm Center for Freedom (SCF) on Jan. 26, 2017, Turkish government has jailed 191 journalists so far, and that most of the journalists have not even seen an indictment against them.

The report also stated that, 92 journalists are wanted for arrest, but remain at large either in Turkey or abroad.

SCF has also said that the number of media organizations seized and shut down by the government has reached 189.
–
By: stockholmcf.org