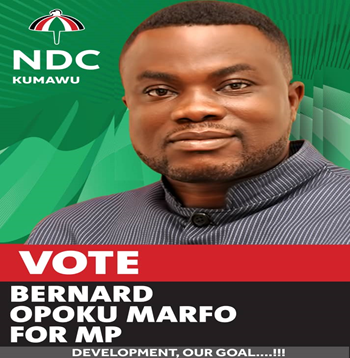 Mr Bernard Opoku Marfo, the NDC Parliamentary aspirant for the Kumawu Constituency says investment in greenhouse farming would be a priority when elected into office.

This, according to him, would help farmers increase their yields and incomes while protecting the environment.

Mr Marfo, a biology tutor at the Dadaese Agriculture Senior High School, in an interview with the Ghana News Agency, said his objective of going into politics was to put his knowledge at the disposal of the people to improve their livelihoods.

He said the people in the constituency, who were mostly farmers, needed new thinking and knowledge and modern farming technology to lift themselves out of poverty.

Mr Marfo, who is currently pursuing a Master’s programme in Biotechnology at the Kwame Nkrumah University of Science and Technology (KNUST), pointed out that greenhouse farming technology was the surest way to guarantee increased yield and sustain smallholder farmers’ incomes to reduce poverty, especially in rural communities.

“The greenhouse technology has the assurance for continuous production all year round, and it will be very prudent to commit my share of the Common Funds and other resources to ensure that farmers in the area increase their incomes,” he emphasized.

He said “the situation where Members of Parliament (MPs) play political gimmick around interventions in their constituencies which have no meaningful life-changing and sustainable livelihood impact for the local people in their areas must change,” Mr Marfo said.

He said MPs must seek support for investments in areas that would impact positively on the lives of the people and change their status.

Mr Marfo said food security and the well-being of the people would be his primary focus, adding that he would take advantage of the large arable land in the Kumawu traditional area, and invite investors to boost agricultural production through the greenhouse farming technology.

He said the impact of the services of MPs should not just be limited to enacting laws but to promote sustainable development.

Mr Marfo said greenhouse farming technology was land, water and soil efficient, which is very important in the production of high-value vegetables such as tomatoes, cucumber, pepper, strawberry, onion and others.

He urged the people to vote for him to help implement his vision to improve their living conditions.